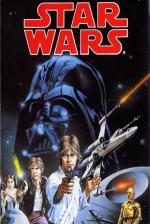 Several years ago Atari released a coin-op arcade game based on that most famous of films, Star Wars. Employing fast moving vector graphics, it was an instant success. Domark have now released a version for the Electron.

As in the original game, the action is divided into three scenarios - dogfight in space, through the towers and down the trench. These scenes are repeated with increasing difficulty as you proceed through the game.

Scene one is based on Luke's dogfight in space en route to the Death Star. The Empire's Tie-fighters zoom in at high speed, launch laser bolts, then veer away. Using the four direction keys you steer the fighter's gunsights over the laser bolt and fire. The same tactics also work with the fighters, but the bolts must be your main priority. Each hit you sustain destroys one of your shields - you begin the game with six. Lose every shield and the next hit will destroy your fighter.

If you survive the dogfight you are transported to the surface of the Death Star (though not on level one). Here you begin a strafing run through a forest of laser-firing defence towers. I found this to be the easiest of the three scenes. By swinging your sights slowly left and right while pressing the fire button, you can destroy all towers and laser bolts in your path without sustaining a hit.

The final scene is set in the trench. To destroy the Death Star you must travel its full length and accurately blast the exhaust port at the far end. Success is rewarded with an exploding Death Star.

On level one the only hazards in the trench are laser bolts - you can avoid these by flying high and left, only venturing down into the trench at the very end to zap the exhaust port. Unfortunately, these tactics don't work on the higher levels, where the trench is criss-crossed by barriers - these must be flown over or under.

Unfortunately although Star Wars sounds attractive, the graphics are chunky (Mode 5) monochrome and at times, poorly defined. The gameplay is very sluggish and the controls are slow to respond. On top of this you have to sit through a 20k loading screen before the game starts to load.

All this adds up to a pretty dull, unexciting fare. I would advise you to try before you buy.

Try before you buy. It all adds up to a pretty dull, unexciting fare.