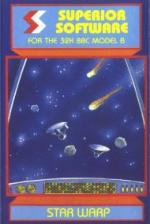 This game is rather old hat and I am surprised that Superior were prepared to put their name to it. It is a 3D space game in which you have a sight and there are huge numbers of fast-moving space ships to shoot.

They appear as if from nowhere and deliver a number of laser blasts to your ship before disappearing again. The limit is the amount of protection from the blasts that your shields offer each one taking its toll. Another limiting factor is the temperature of your weapon. If this climbs too high, you are left stranded without any defence until they cut in again. In all, there is a great deal of action and little originality.

It would have been improved if you had been piloting the ship instead of just aiming the sights. The graphics are good, steady and quite interesting but even this cannot raise the game above the mediocre. If it hadn't been done several times before I might enthuse but this is far too late to make any impact at all.

Other BBC Model B Game Reviews By D.C.

If it hadn't been done several times before I might enthuse but this is far too late to make any impact at all.