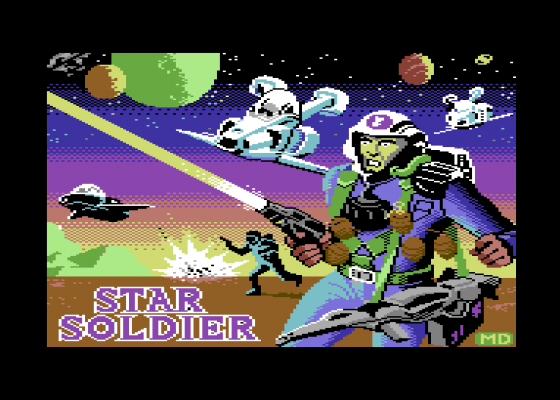 Star Soldier - that's your job description. It sounds glamorous, but in reality you're a bounty hunter, selling your services to the highest bidder. You're usually hired to wipe out unwanted criminals and dangerous organisations. The job involves travelling from planet to planet and taking on armies of villains single-handedly. It's a tough life, but a profitable one if the missions undertaken are completed successfully.

Mission control consists of a split-screen computer - the upper half is a star map and the lower half a display panel which features a series of icons, along with your cash total and present status. Using the icons you can load up your utility belt (used to carry equipment into battle) with up to twenty-nine weapons: grenades, smart bombs, explosives, extra energy and escape units are available in limited quantities. All have a price, and money is deducted from your total as each item is bought.

Everything that a Star Soldier does costs money - even promotions can be bought and sold! Changing rank can make sound economic sense however, as jobs pay more for those in higher positions. 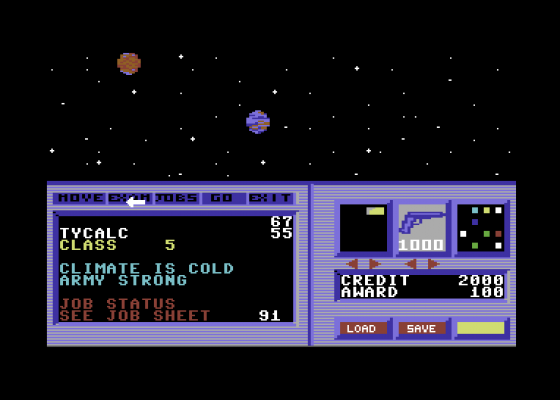 When the equipping routine is complete, the status panel can be changed to show a computer VDU with four labelled icons above it: Jobs, Exam, Move and Go. Selecting MOVE accesses a cursor to the centre of the upper screen and the map can be scrolled around it. Pressing the fire button selects whichever star or planet is in the proximity of the cursor, with a text read-out on the VDU giving details of the type of jobs available there.

Selecting the JOBS icon reveals the difficulty and objective of the mission in question - and the reward for completing it. A job is undertaken by selecting the GO icon. At this point, the screen changes to display an aerial view of your bounty hunter and his surroundings. As he moves across the landscape, the screen scrolls horizontally from left to right. Enemy soldiers emerge from all sides of the screen and attack, firing bullets in an attempt to do damage to the intruder.

Your energy status is displayed at the bottom of the screen as a diminishing bar - carrying an Energy Pod automatically replenishes lost energy when the bar reaches zero. If no pod is being carried however, total energy loss is fatal and the game ends. 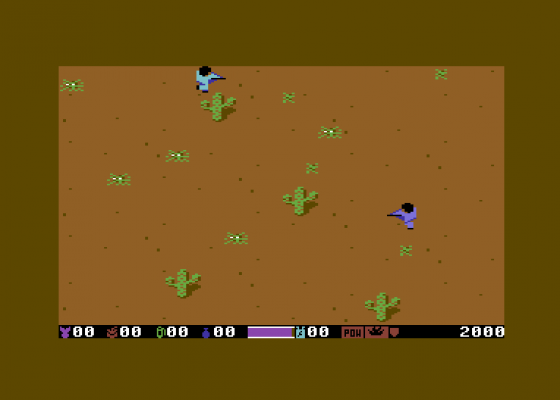 A gun is the best method of defence as it fires an unlimited supply of bullets - the finite supply of smart bombs, grenades and explosives have to be used far more sparingly. Every so often shooting or blowing up an enemy soldier reveals an object which can be picked up - these include Extra Money. Temporary Immunity from enemy bullets and Extra Energy Pods.

The objective is to keep moving left until you reach the end of the landscape, whereupon a congratulatory message is given along with a cash bonus. The screen then reverts to mission control, where another job can be chosen.

Star Soldier would have been a good game if it was considerably faster and there was more to do than run around shooting a few enemy soldiers. It's essentially a slower, horizontally scrolling version of Commando, but with less action and thrills. 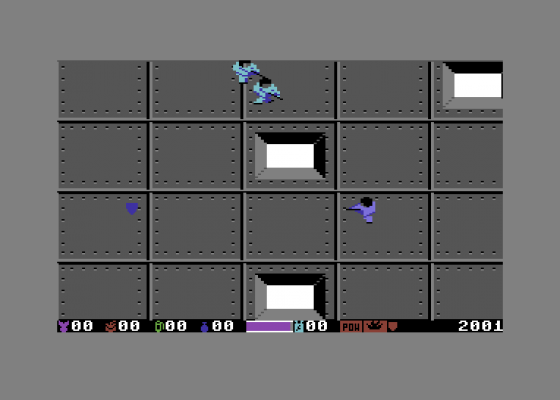 The programmer has introduced a few new elements - such as the ability to choose missions and weaponry - but on the whole there aren't enough original or outstanding features to warrant a purchase, especially at the price.

Question: What did Quicksilva get when they crossed Commando with a sprinkling of Elite? Answer: a less than mediocre game called Star Soldier... Theoretically, Star Soldier had potential - but unfortunately the programmer has fouled up badly.

The program is riddled with annoying bugs that spoil the gameplay, which is already fairly slow and tedious. The graphics can only be described as fair - the characters are basic, but the playing area scrolls well and is adequately detailed. 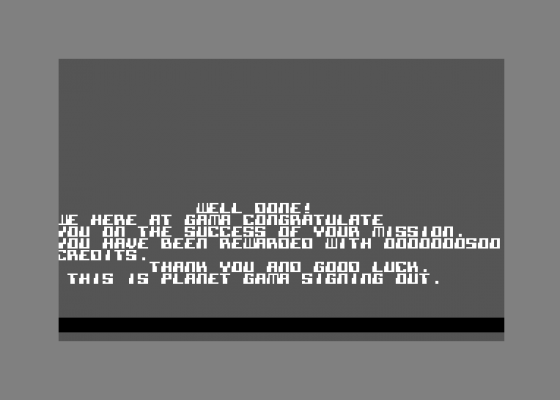 The sound is quite good, even though the title screen music doesn't really go with the macho mercenary image. There are too many bugs in this for it to be any fun to play - I wouldn't recommend Star Soldier at all.

Hookability 41%
Simple and slow shoot-'em-up action which fails to captivate.

Lastability 34%
Not enough variety or thrills to entertain.

Value For Money 33%
Well over the odds for a below average game. 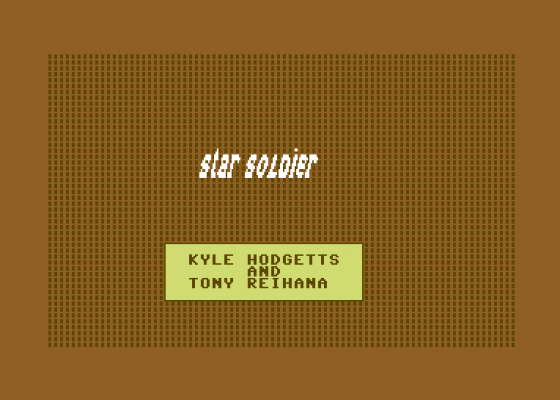