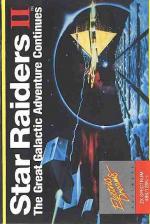 'As Dirk Diehard edged into the seat of his souped-up Morris Minor with the dayglo go-faster stripes, he thought back to the meeting he'd just left. He'd been given custody of the Liberty Star, a hi-tech spacecraft that had pulse lasers, an ion cannon, and air (or space) to ground missiles, and it all came complete with a four-year guarantee! It sounded good. Too good. He couldn't understand why they'd kept smiling at him, and why they'd chortled merrily when he left. Then he opened his instructions and read what he had to do...'

Yes, folks, it's shoot the bad guys time, and what a doozy! All you have to do is single-handedly save four planets, three space stations, defeat hundreds of space ships and destroy an entire enemy solar system! There's only one snag - you've only got one ship to do it in.

But all is not lost. In fact, far from it. You see, I reckoned after a white that it was slightly harder to die than to stay alive. Wot? Well, the only way to lose a game is to run out of energy, and it's not easy to do that -whenever you're getting low you just warp to a space station and fill up the tank.

The ships are a doddle to destroy, and you amass huge scores by attacking the baddies (Zylons to you, guy) and warping off before you're dog meat. The ships are well animated, though the fighters themselves are pretty basic, and the motherships bear a strong resemblance to the saucers in V. There are also big tankers which, if you don't blow them up in time, emit strange rays that sap your energy. Stay there too long and the game is over.

If you press Space, up pops a map of the local star system, and if you move a line to the indicated area you're told how many ships are there, what type of planet it is, how many cities it has and so on. The map also shows the state of the battle, indicating Zylon squadrons and their positions. It's randomly generated each game, so you're never too sure what you'll be facing the next time round. The planets are shown too - they turn white if they're devoid of life. When you arrive on them, they scroll realistically at the bottom of the screen. By pushing the joystick forward, you can speed up your travel across them, while, pulling back slows you down. Your actual manoeuvres are limited to left and right, so the fighters, which have an annoying habit of hovering above your gunsights and firing at you, can prove hard to hit.

It's a good game, all in all, but limited - there's not a lot of variety, so anyone other than shoot 'em up freaks may get bored. The graphics aren't all they could be, but the strategy element certainly adds something. The only niggle I have is in the choice of keys - when you're trying to hit Space to get out of the way of three fighters, it's all too easy to nudge Caps Shift and find the game aborting in front of your eyes. But that's just a small complaint. If you'll excuse me, I'm off to save a couple of planets before tea!

The graphics aren't all they could be, but the strategy element certainly adds something.