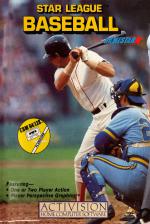 Baseball is not a well-known sport in this country and yet the success of Imagine's World Series Baseball must indicate a certain amount of interest in the subject. Now Activision's version of the sport is on the scene. How does it compare?

The first obvious difference is the viewpoint which is from the first base side, parallel to the pitcher's field of action. Next the less sophisticated graphics and lack of a large, live action projection screen is apparent.

The options available belie the American origins of the game, where more emphasis is placed on tactics for a more informed audience.

To give you a chance at batting practice, you can elect to face 'Heat' Muldoon in a series of random pitches until such time as you feel ready for action in the big game.

The options for the batter involve two joystick positions and the fire button. If the fire button is held, the ball is bunted and, if pressed briefly, a full swing is played.

The main game consists of the usual nine innings and the pitching functions of the eight joystick positions depends on the team selected at the commencement of the game. Here a little more instruction would have been helpful to explain knucklers, sinkers, change-ups, sliders and screwballs.

When the ball is struck, the nearest fielder to its landing place comes under joystick control but I found the 3D view made it difficult to anticipate trajectory, but I have that problem with many 3D games.

On retrieving the ball the fielder throws it back to a base selected by the four main points of the joystick, or the pitcher if the stick is not moved.

Playing against the computer is not the easiest way to learn tactics. It only has one level of play and that's a pretty high standard. As with most sports games, a human opponent is always preferable.

Now for the big question, which version do I prefer? Sorry, but I'm going to duck out of this one because it depends on whether game complexity or graphic sophistication is the crucial factor. Ocean have the graphics but Activision have the game.

Playing against the computer is not the easiest way to learn tactics. It only has one level of play and that's a pretty high standard. As with most sports games, a human opponent is always preferable.