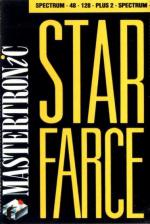 What is Star Farce? In one instance, it's a rip-off of that classic old coin-op, Star Force. In the other instance it's fast, colourful, playable fun and cheap.

As you have probably already guessed from the screenshots Star Farce bears a remarkable resemblance to Lightforce, which broke new ground like nobody's business when it was let loose a while back. Star Farce is better!

The plot consists of the same old trot. You are a lone fighter... blah blah blah... evil dictator (or should that be potater)... stop him... hordes of alien monsters... free the world... etc etc.

What isn't apparent from the screenshots is that Star Farce is a shoot-'em-up of the highest degree, and I'm not just saying that so Mastertronic's Andrew Wright, my bestest friend in all the world, won't break my legs. It rules over a lot of recent, and not so recent SEUs in quite a few ways.

It's colourful. Colour has been used incredibly well. I'm not going to say that there isn't any colour clash, because there is, but who cares.

It's destructive. There isn't a single item I could find that couldn't be shot. I especially like the electric power lines that explode in a chain reaction when you shoot the generators.

It's progressive. You can collect an add-on for your ship that doubles your firepower and takes the first hit for you.

It's got interconnecting levels. You can fall through holes into other levels where you are put face to face with a large mothership which appears at various places throughout each level. This has to be shot before you can get on to the next level.

It's playable. The problem with games like Lightforce is, though they boast some pretty clever graphics, they're unplayable. Star Farce isn't. It's playable and has nice graphics.

It's cleverly programmed. There are a lot of clever programming techniques involved, the most impressive being the elimination of borders on the introductory screen.

Star Farce is, by no means, the best shoot-'em-up I've ever seen, but it is a lot better than a lot I've seen recently. At this price, you'd be a fool to miss it.

Star Farce is, by no means, the best shoot-'em-up I've ever seen, but it is a lot better than a lot I've seen recently.