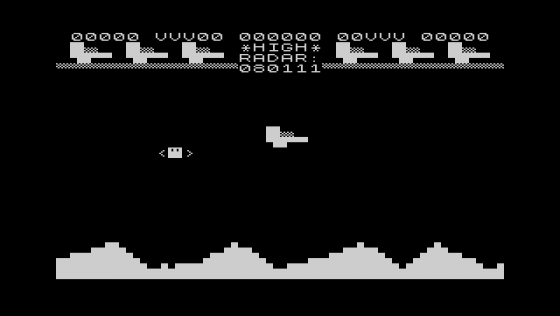 Star Defence is a fast moving, arcade-type game. As usual, JRS have used their excellent fast-load feature and this game for the 16K ZX81 only takes about a minute to set up.

The object of this game is to defend your ship and planet from marauding aliens. The screen display is good, showing the planet beneath you, your ship - which can move up or down, the aliens and a radar display. This shows the current score, the number and location of the aliens, the number of lives (ships) and "smart" bombs remaining, and the number of bombs dropped by the aliens.

You attempt to blast the aliens with your laser cannon and smart bombs as they swoop around the galaxy, and before they destroy you or the planet's force-field by delivering 20 bombs. You have three lives, and there is a one or two player option. Action is smooth and fast, and the graphics are effective, the shower of debris if you are shot down or crash is particularly good. If you manage to destroy twenty aliens, a harder wave appears, each alien is worth ten points. A very good arcade action game.