Published in The Micro User 5.09 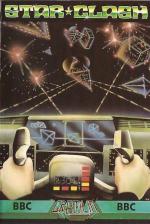 Wrongly accused of a crime he did not commit, the Emperor is forced to flee the galaxy. You have been assigned the post of imperial bodyguard: Your duty is to protect the Emperor's star cruiser from the unwelcome (and usually violent), attentions of galactic customs officials.

Star Clash is a game which is very much in the Elite mould, a fast moving, vector graphic shoot-'em-up. Forget the trading, the drug smuggling, the bounty hunting - just get out there and blast.

The Elite style is maintained through the inclusion ofan identical three dimensional radar display. This enables you to pinpoint the position of both the customs ships (white dots), andthe star cruiser (a purple dot).

This purple dot is very important as it is all too easy to get wrapped up in your own dogfights, and forget the Emperor. The first indication that all is not well is a flashing screen and the sound of gunfire. This is the time to rush to your master's side before he, and the game, is terminated.

Decelerating from warp speed as you approach the star cruiser you will see pulses of laser energy being fired by the customs ship. The cruiser manages to avoid some but those which strike home do so with a shower of sparks and flying metal.

Your ship fires two laser bolts which converge as they shrink into the distance. The inaccuracies become apparent when you fire a shot and then move the joystick: Instead of following its initial trajectory the laser pulse moves with the gunsights - hardly a major failing but irritating.

Progress is measured by how many star gates you pass trough. Astar gate is a hyperspace portal through which you jump to another galaxy. Unfortunately, each gate is heavily defended by a squadron of trigger-happy customs officials.

A parade of attackers is displayed in a demo routine at the start of the program. These are rotated through various axes and their points value shown on the screen - though some won't be encountered until the higher levels. The one ship that is not displayed is the star cruiser. The easiest way to identify this is to blast every ship you meet during the first game - the star cruiser was the last one you shot before the game ended.

The instructions provided are sparse, giving no explanation of the instrument display. This wasn't too disastrous as the white on cyan instrument panel was practically invisible on my humble colour monitor.

Star Clash is a very enjoyable, budget-priced trip around the universe with a hefty helping of zapping thrown in for good measure.

Other BBC Model B Game Reviews By Nev Astly

Star Clash is a very enjoyable, budget-priced trip around the universe with a hefty helping of zapping thrown in for good measure.