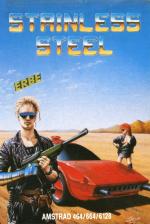 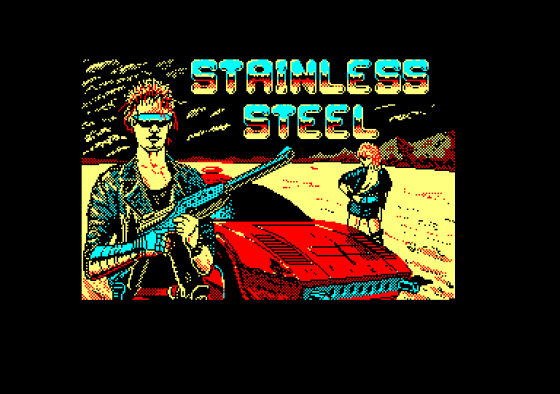 The 'teenage superhero' of the title is one Ricky Steel, and presumably the stainless part refers to frequent trips to the launderette with his undies. This condition is doubt-less brought on by having to battle an endless horde of aliens in a four-part shoot-'em-up, where he always ends up plastered all over a wall or a floor from a violent explosion.

The four zones consist of vertically scrolling landscapes on which you have to battle a variety of robot troops. In each zone the scenery, the robots and your task are different, although the gameplay is very similar for all four. The scrolling landscape occupies only a relatively small area of the screen and each stage has only one colour, although the landscape and character graphics are quite detailed.

In zone 0 you must move on foot up a roadway to reach your car, Nightwind. Trying to stop you are two sorts of robot: helicopters that move up and down the road shooting at you and robots that move across the road, also shooting. Like all the robots in the game these can be dispatched with your own laser fire. As you walk along, a fuel gauge runs down and has to be replenished with fuel cells floating at intervals along the road. You have to be careful since you can shoot these as well, and running out of fuel is fatal. 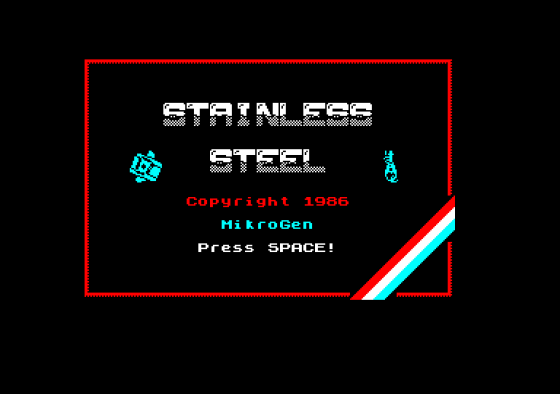 In zone 0 the only other obstacles are a couple of lines of cars behind two barriers across the road. However in zone 1 you have to drive across a desert littered with deadly obstacles, your car can fire and fly up and down, and accelerate, but is still dependent on regular fuel replenishment. Meanwhile, you're harassed by helicopters, missiles and static guns. All of these have to be wiped out before going on to the next zone.

Zone 2 has you flying over a waterway on which submarines pop up from time to time. You have to bomb all the submarines and shoot fighter planes to move further on. The supply of bombs is limited. You are without the shield which in the first two zones could protect you against bullets for a short time.

In the final zone, you have to kill the evil genius responsible for the whole shooting match. It is of coursc pretty tough as you drive through more new surroundings. To help you in all the zones there is a scanner - very useful but awkward, because it is horizontal while the route you travel is vertical. 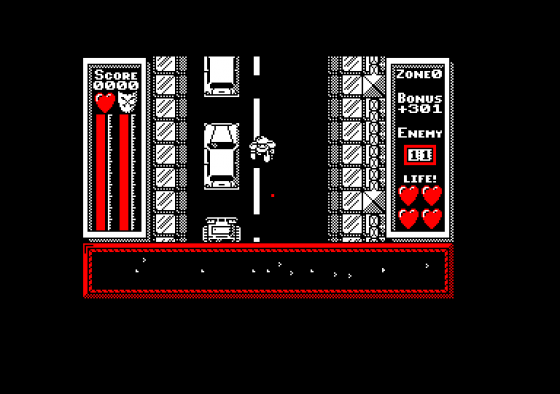 This is a competent shoot-'em-up which will provide a tough challenge. Two things stop it being even better: despite detailed graphics and explosions the use of colour is woeful, and there just aren't enough stages or variety to them for the game to really last. Not a bad buy, though if you're loo-king for a skillful shoot-'em-up.

This game is frustrating. It has rotten collision detection and makes very poor use of colour. It sends you right back to the start of the section every lime you die. Worse still, the scanner is sideways-on to the direction of play, making it extremely difficult to follow. The most frustrating thing, however, is that so much effort went to produce such a poor game.

The bullets can be a bit harder to see, but the game certainly isn't any less colourful in green.

N. Awful lack of colour.
N. Not enough variety in the action.

The most frustrating thing about this is that so much effort has gone into producing such a poor game. 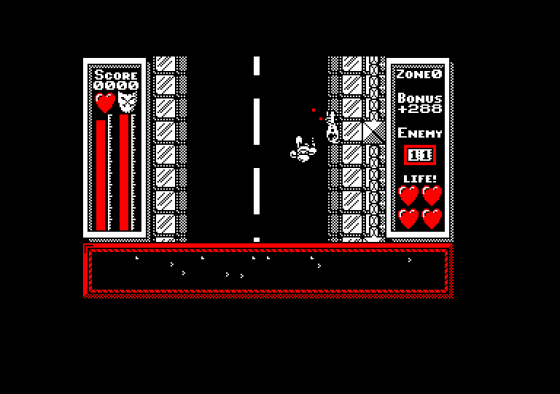