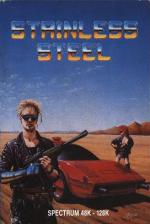 Ricky Steel is here! The new teenage super hero with the mechanical arm has finally arrived. Just in time, it seems, to save the world from the evil Dr Vardos and his merciless minions. First on foot and then in his combat vehicle Nightwind, Ricky weaves and dodges his way past the the enemy craft sent by the evil doctor as he heads towards the ultimate confrontation - with Vardos himself!

The action is seen from above and the play area scrolls up and down. The game contains four zones, each with its own set of hazards which become successively more treacherous. Enemy craft can approach from either in front or behind so Ricky has to be constantly alert - if his concentration wavers for a second, the android army commanded by Dr V is likely to send him to that scrapheap in the sky.

In the first zone Ricky has to leg it along the tarmac, avoiding helicopters which have the capacity to blast him to smithereens with their missiles. A collision with a chopper is also fatal. Fortunately, Rick can fire missiles too, and he also has a bomb shield to soften the effects of enemy attack. Trundling past traffic jams and road barriers while destroying android patrol ships which move across the road, the man with a steel arm has to make for the end of the zone and a reunion with his cherished motor.

In zone two, aboard Nightwind and flying through the air, Ricky's task is a little harder. Bubbles of fuel need to be collected to keep the super-car in the air as the dynamic duo fight thelr way across a desert. Rockets come zooming back and forth trying to eradicate Ricky, but Nightwind is equipped with a powerful laser cannon, which evens the odds a little as Ricky dodges and weaves his way towards Dr Vardos and his hideout. All the enemy forces have to be wiped out before the zone is completed.

In the third zone, battle resumes over a watery channel. Nightwind is amphibious as well as capable of aerobatics and as he deals with the airborne threat, Ricky has to watch out for submarines which pop up from the water every so often. Plonking a bomb on the deck of a submarine requires sharp reactions and quick timing, but lots of points are there for the winning!

The final zone is populated by androids in the shape of lizards and salamanders as well as Dr Vardos' other minions. Their aim is to thwart Ricky's noble attempt to save the world by finding and eliminating the evil Dr Vardos.

Status displays flank the main action screen: on the left, Ricky's energy and shield or arsenal strength is displayed below the score meter; on the right the zone number is displayed, together with the bonus points awarded, the number of androids that remain in the zone, and large red hearts indicate how many of Ricky's four lives remain. If the enemy forces are not shot down fast enough, it's possible to end up with a negative bonus score, so quick shooting is the order of the day... A radar screen below the main display reveals Ricky's position in relation to the nasties in the current zone, and a message is flashed onto this screen when Ricky bites the dust.

Steel by name and steel by nature: it takes more than a few androids to despatch a teenage super hero. Mikro-Gen plan to produce further games starring Ricky, but first he has to beat Dr Vardos.

Steel by name and steel by nature: it takes more than a few androids to despatch this teenage super hero.