Published in Your Sinclair #78 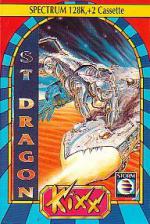 I was really looking forward to this one, 'Oh wow, another incredible Speccy horizontal shoot-'em-up to rival R-Type in the arcade accuracy and general all-round fabness stakes, I thought'. Big (big) mistake. When I finally got the first level up and running (it's another one of those horrible beasts, a game which multi-loads even on 128K machines), I was mortified to find myself playing a hideously slow, graphically abysmal, impossibly tedious load of old junk that bore about as much resemblance to the gorgeous coin-op as I do to Princess Anne (or, indeed the horse she road in on).

The actual playing area is tiny, but in order to make it seem bigger the programmers haven't put any kind of border around it, so that you can easily find yourself moving up the screen to avoid a bullet, only to discover too late that you can't actually got any further. So you die, get sent back miles through the bits you've already ploughed tortuously past, and do the whole thing again until you die of the boredom of seeing every attack and every alien appear from the exact same place every time. As if that weren't enough, the far-from dazzling pace drops to a crawl whenever more than about four sprites are on the screen at once, making the game an utter chore. The only light at the end of the tunnel comes from some of the big, nicely animated enemies like the robot tigers and the gigantic bull at the end of level one, but they're not worth the damage you'll have to wreak on your keyboard to get to see them.

If you've got R-Type, go and play it instead. Forget all about this dross.