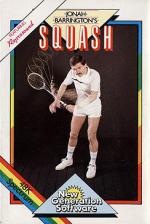 Jonah Barrington's Squash (to give it its full title) is a superb simulation of a frantic sport, which features animated players and even speech.

The game accurately represents the game of squash and is played to the International Squash Federation's rules which are included on the cassette inlay. The players are moved around the court by either defined keyboard keys or a joystick. I found that using the joystick was a distinct advantage as you are more free to think about your shot than which key you should press.

In the Commodore version the two players are distinguished by their shirt colour, one of which is white, the other yellow. White always starts the game by serving so I would suggest you take account of this slight advantge particularly when playing the computer opponent (as you will need all the help that you can get).

The Spectrum version sacrifices the colour for a playable black and white display, with the players distinguishable by a white band on one player's shirt.

The tactics and feel of the game are the same in both versions. Practice will show you how to serve into a corner or play your opponent into difficulty. However, you should avoid obstructing your opponent as a penalty will be called and a scoring chance may be lost. These calls are the score announced by a synthesized version of Barrington's voice which is impressive on the C64 but barely audible on the Spectrum!

Matches can be played at a number of speeds depicted by the colour of the ball ranging from the possible (red) to the impossible (yellow) over 1, 3 or 5 games.

This excellent simulation should be enjoyed by gamers and squash enthusiasts alike.

This excellent simulation should be enjoyed by gamers and squash enthusiasts alike.