The Black Spy and White Spy have been fighting it out in the pages of MAD for a long time. They first made the transition to computer over two years ago in the game Spy Vs. Spy. Two sequels to the game were done, but they never previously appeared on the CPC. Now they are available as a trilogy. The games can be played by one or two players.

This was a Rave review in issue 3. It's set in an embassy where you have to collect a briefcase, some money, a passport, a key and the secret plans. The objects are found in and around the furniture within the embassy. There is only one of each object and so you must do battle with your opponent for them. There are two ways to do this: good old-fashioned beating around the head with a club, or laying traps.

Traps are accessed via the "Trapulator" and come in five varieties: bombs, springs, water buckets, guns and a time bomb. A double click on the fire button puts you in trap mode and from there you can choose which of the five to choose. A map of the embassy can also be displayed from the Trapulator.

Bombs and springs can be positioned on furniture so that they go off when next touched. Bombs blow up the spy and springs throw him across the room into the wall. The water bucket and gun are fitted to doors. A bucket of water electrifies your opponent and the gun, attached to a string, shoots him. The time bomb ticks away the seconds and goes off killing anyone in the room, including you if you're foolish enough to hang around. When a spy is killed, he grows a pair of wings and flies off the screen angelically - surprising they don't head downward really!

Once all five of the objects have been collected you just have to find the exit to the airport, go through it and your plane takes off leaving the other spy to face his superiors.

The major difference between this and Spy Vs. Spy is that rather than it being a flick-screen game, it scrolls when you move left or right. The Trapulator is still there with a new selection of traps to use: snares, open pits, punji pits, napalm and coconut bombs. Snares are attached to trees and the unsuspecting victim is turned upside down to dangle for a short while.

Open pits can be dug with a spade and if you then take a stake to the pit you can make a punji pit. The napalm temporarily cremates the spy and the coconut bomb needs to be filled with gasoline from a wrecked aircraft. There's also a gun that you can use to shoot the other spy, if you can find it.

Your mission is to recover the three parts of the XJ4.5 missile and make your way to the submarine before the volcano on the island erupts killing everyone. The sub then sails away from the island leaving the other spy to his doom.

The spies' last mission is set in the frozen wastes of the arctic. Your task this time is to obtain a gyroscope, punch card, fuel and a large briefcase. The club combat has gone and been replaced by something that's much more fun: snowball fights.

The traps are still there and work in a similar way to the other two games. The traps are hole-in-the-ice-trick, booby trapped icicles, ice water buckets and TNT. The hole-in-the-ice-trick causes your opponent to drop into the frozen waters, the icicles fall on the head of the next person to pass under it, ice water makes you slip and the TNT blows you up when the plunger on the detonator is depressed.

Graphically, each game is very similar and the spies are identical. The scrolling in the last two games is smooth, but it does slow down a little when both spies are in the same location. The Island Caper has a continuous tune playing and Arctic Antics has a great title tune.

As individual games they would be overpriced, but as a trilogy they're great value for money. Setting traps is still as much fun as ever and the multiple skill levels and map sizes makes the games more demanding. If you enjoyed the original Spy Vs. Spy then you'll thoroughly enjoy this compilation.

Win each game on level three.

You'll have no problems spotting the objects in green.

Sonics 69%
P. The tune in Arctic Antics is brilliant.
N. Sound effects are a little disappointing.

Grab Factor 76%
P. Once you get over the initial confusion with the Trapulator, you'll be hooked!
N. The three games are very similar.

Staying Power 82%
P. Three games for the price of one!
P. Lots of difficulty levels.

If you enjoyed the original Spy Vs. Spy then you'll thoroughly enjoy this compilation. 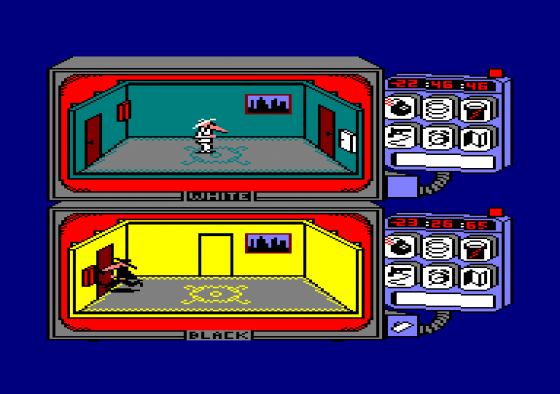