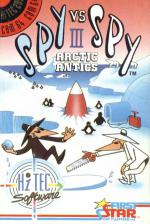 Welcome once again to the madcap world of the Spies from MAD Magazine, as Databyte/First Star bring you the third in the Spy Vs. Spy series.

The black and white masters of espionage conspire against one another once more, this time on an Arctic island. And, as with the previous games, the spurious activities of both characters are displayed simultaneously by split-screen 'Simulvision'.

Trapped in the snowy wasted, there is only one way off the island - by rocket. Unfortunately, three vital pieces have gone missing and are scattered somewhere across the island. A Gyroscope, Uranium Fuel Cell and Entry Punch Card must be collected and taken to the rocket before it can be successfully launched.

Prior to starting this hunt, you have the option for either a one or two player game. If the solo option is taken, it is possible to alter the Intelligence Quotient of the computer-controlled spy to one of four levels. This effectively sets the difficulty of your opponent.

You also have seven islands to choose from on which to pit your strategic wits against one another, and a map is provided showing the positions of each player and those of the missing components. This can be called up at any time during the game on your 'Trapulator' - the screen which displays your current surroundings and handles your traps and options. Selections are made via a line of icons at the bottom of the Trapulator, and it also displays any items found.

Both spies have a series of booby traps available in their dirty tricks department. These include blowing up your opponent with dynamite, setting icicles to fall when walked under, cutting holes in the ice which can be falled through, and spilling water to form a sheet of ice to be slipped on.

None of the traps are immediately fatal, however they reduce the body temperature of your spy - displayed as a mercury thermometer on the left of the corresponding Trapulator. Temperature is increased by entering igloos containing a fire, Standing next to the fire sends the spy's temperature back up again, allowing him to continue in safety.

When the two agents are in the same location, they both appear in a single screen and snowball fights ensue. Being hit by snowballs again lowers their temperature, and can prove fatal to an already cold spy.

The game ends when either one of the spies boards and launches the rocket, or when both spies have failed to escape, and the blizzard arrives, turning them both into blocks of ice.

I hate to say it - but I'm getting a little bored with the "Spy" series. The original Spy Vs. Spy is undoubtedly the best of the bunch, with the Island Caper a close second.

But, sadly, I found Arctic Antics less playable than its predecessors - which raises the question... why bother? Surely sequels should be an improvement or a progression? If you want a Spy game, search out a copy of the first or second release - they may be difficult to find but in the end it's worth it.

I like this a lot - it has all the humour of the original cartoon strip, combining some fabulous graphics and other neat touches. Both the one- and two-player games are challenging and fun, especially the latter, and there is an extensive options screen to change the parameters of the game.

New traps have been incorporated to add variety, but when it boils down to it, it's basically more of the same. Spy Vs. Spy III might well disappoint those who already own the first two in the series, but if you haven't played I or II then give this a try.

There's no doubting the technical excellence of the Spy series, but I'm not overly excited by the gameplay, which seems somewhat laborious and complicated.

The feeling of playing against an opponent is not exactly overwhelming as you may not meet up all that often. Control is a little fiddly too, with both actions and the choice of options being accessed from the same joystick. This is especially apparent when trying to quickly set traps or pick items up.

I really don't think that this will provide any lasting interest for the solo spy.

Graphics 84%
Small but detailed cartoon characters and suitably cold scenery, although the scrolling is a bit wobbly.

Sound 53%
Reasonable spot effects and harsh music - fortunately, this can be turned off.

Hookability 74%
Not the easiest game to get to grips with, but instantly amusing and playable.

Lastability 76%
A fair amount of variety for a single player, but it's the two player option that provides the most long-term fun.

Value For Money 69%
An ageing concept at a modern price.

Overall 75%
A good game in its own right, but no advance on the previous two releases.

A good game in its own right, but no advance on the previous two releases.