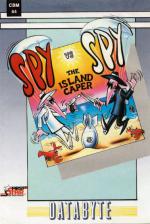 Following the ZZAP! preview of Spy vs Spy: The Island Caper last month, here is the full review as promised ...

Far, far away, deep in the Caribbean lies an island - Spy Island, a tropical paradise long abandoned by man or beast and geographically discarded many years ago. Until now that is.

The top secret XJ4½ missile recently crash-landed on the island, breaking up and scattering into three pieces as it did so. It is vitally important that this missile does not fall into enemy hands so it's your mission to recover all three parts, assemble them, and escape by a submarine moored somewhere off the island, before the enemy beats you to it. The opposition can either be computer-controlled or human, the computer having a range of five IQs to choose from and the human ... well that's up to you!

Each spy has a constantly replenishing energy bar that diminishes on contact with anything nasty. It takes time to replete, though, so great care must be taken not to lose any in the first place.

As in the first game, each spy has a Trapulator (this one's the newer model, the FSS 85) at their disposal. This amazing piece of equipment allows a spy to store, and most importantly, use the various objects found around the island, to hinder the enemy spy's progress. Objects are usually buried under the sand, but are uncovered when picked up by a spy. The converse also applies - a spy can bury any objects that are found lying on the sand. A couple of presses of the fire button activate the Trapulator and let you select a trap, or view a map of the island.

Six types of trap are accessible from the Trapulator, and each can only be used in specific places and situations.

OPEN PITS have to be dug with the shovel provided, and waste precious time should a spy fall into one. The shovel can only dig eight holes before breaking though, so each pit needs to be placed with care. Pits can be dug anywhere except in the water (who says computer games are for mindless morons?).

PUNJI PITS are simply an extension of the open pit. A pit has to be dug as before, only this time if a wooden stake is stuck in the bottom, the hole covers itself, thus hiding it from an unsuspecting spy's eyes.

A GUN is lying somewhere on the island and if found it can be used to shoot the opposition and momentarily put them out of control. That is, if the bullets aren't dud and the gun is fully loaded ...

COCONUT BOMBS can be produced by combining coconuts with petrol from your aeroplane wreckage, and prove a very effective land-mine when buried beneath the sand. Should either spy fall victim to such a device then they will be blown to a frazzle and crumble, comically, into a pile of ash.

SNARES can be set to catch an unwary enemy spy off-guard (and yourself if you're not too careful)! A spy simply climbs up the nearest tree with a rope, ties one end to the treetop, climbs down again and buries the other end in the sand ... and there's the snare, primed and ready to whisk the first to stumble across it, up into the trees!

NAPALM canisters can be buried in the same manner as the coconut bombs and have the same deadly effect when uncovered!

POOLS OF QUICKSAND are scattered about the island and are more of a 'natural' trap, draining a spy of his energy if fallen into. If such a disaster should occur, then you need to waggle the joystick like crazy to get him out again!

HAND TO HAND COMBAT between spies works in the same manner as in the original game. When the two spies appear on the same screen, then they can beat the living daylights out of one and other with their spy swords. Spies can biff their opponent over the head or prod them in the vitals, each hit sapping vital energy (no pun intended). These swords are rather blunt though, so it takes quite a few hits to kill a spy.

A MAP of the island is stored in a spy's Trapulator and can be recalled for viewing at any time. It shows a plan view of the island along with a trail of footprints, to show where the spy last walked, and the approximate location of the missile parts.

Unfortunately time is not on your side, as there is a rather volatile volcano resident on the island and it's about to erupt. The countdown to eruption is displayed to the right of the screen and the length of this time depends upon the skill level chosen. There are seven levels of play, each differing slightly in features, such as two islands instead of one and more or less objects to hand. Levels one to four have one island to explore of sizes between six and twenty sectors. Levels five and six, on the other hand, have two islands, so that you have to swim between them! This gives rise to yet more problems, since the surrounding sea has one or two resident sharks! Running into a shark (or should I say, swimming into one) will almost certainly result in your spy's demise, as he is dragged below the depths for a short period of time before he can break free.

If a spy runs out of energy whilst bathing then he'll sink to his doom, releasing a few last bubbles as his possessions are washed up onto the shore.

The submarine lies somewhere off the coast of the island and, like the embassy door in the original game, it can either be hidden until someone has collected the complete missile, or constantly exposed. If neither spy makes it to the sub on time then you are treated with a view of the island being bathed in the glorious glow of the volcano's lava flow.

I've been a great fun of Spy vs Spy since its release at the end of last year and I was extremely chuffed at First Star's decision to produce a follow up. Spy vs Spy II has quite a few similarities to its predecessor, namely the re-use of the Simulvision and Simulplay features, the great music and the actual 'look' and 'feel' of the game. This may not strike most people as being a good idea, but there are enough new gameplay elements that more than compensate for such mimicry.

The graphics have also been improved, with the spies behaving more like their comic strip counterparts than before - I especially like the really sick results of setting off traps such as the coconut mines! I would say that this successor is as enjoyable to play as the original, if not more so, and I recommend it heartily to all Spy vs Spy lovers.

The problem with sequels is in being no better than the originator, but Spy vs Spy II deals a contemptuous blow to this theory. To me, it's quite clearly a better game than the first. It looks better, with more varied backgrounds and locations, and the capers you have to get up to are more involving to the player(s) and have funnier results. Games ought to be fun to play, but to be offered genuine humour as well as a need for quick and clever thinking is really all you can ask for - and this game provides it.

Spy Vs. Spy was a real smash hit and still sells very well on the C64; the sequel I'm glad to say looks like it'll follow in its footsteps. Hoofing round the island bashing the other player is a great laugh, and outthinking your opponent so you can fool him with a meaty trap is even better. There's plenty of things to do and the game will take some time to master, especially with its multitude of levels and options. Playing two-players is still the best option of all, especially if you're evenly matched; the things you can do to each other are amazing.

Hookability 96%
As gripping as any good spy novel.

Lastability 93%
Several levels of play and a two-player option to keep you enthralled.

Value For Money 92%
A good package at a good price.

Overall 92%
Fans of the original won't be disappointed.

A good package at a good price. Fans of the original won't be disappointed.