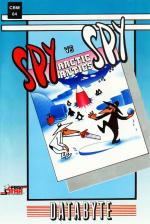 Chill out, man. It's those MAD spies again, turning the arctic into a snow-go area for espionage.

If my memory serves me well, this is the third of the Spy Vs. Spy games and Artic Antics is more of the same. Databyte has certainly taken its time bringing this one out but, judging from the response of our recent Spy Vs. Spy competition, there's still a great amount of interest in it.

Once again, it's the white spy versus the black spy in a mission to be the first into outer space.

The race is on for each spy to collect a space helmet, navigation chart, uranium cube and the "master carrier" before entering the rocket for blast off.

As before, the spies move around and they brave blizzards, bears and penguins, and can indulge in snowball fights, deadly icicles, etc.

Each spy can lay traps for the other - such as sawing holes in the ice, making ice-patches and even blowing your opponent up. Running along the bottom of each screen is the "trapulator" which displays the items each spy has managed to collect. The screen display on my instruction sheet included an icon for snowballs.

As with the others, it's playable and great fun. I spy another winner.

As with the others, it's playable and great fun. I spy another winner.