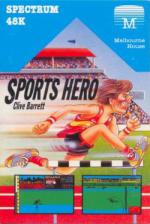 As a result of the tremendous success of Track & Field in the arcades in this, the Olympic year, a number of companies have jumped on the bandwagon to produce clones for all micros.

The latest to enter the great race is Melbourne House with Sports Hero.

Crammed into the Spectrum's memory are four events - 100 metre sprint, long jump, 110 metre hurdles and the pole vault with a choice of three levels.

Under starters orders - BANG - and the runners were off, haring through the streets past grafitti covered billboards proclaiming 'Brixton Rules'. No time to recover - on to the next event.

If you qualify in all four events you will go onto the next level where you will find yourself running for the university team.

The game is played in the same way as Track & Field where you have two run buttons and a jump button - necessary for hurdles, pole vault and the long jump. In order to run you will have to press the run buttons rapidly and an indicator will chart your speed.

A few small grouses - there isn't any sound except for a bleep from the starter's pistol. The game would be greatly enhanced if you could hear the sound of feet pounding up the track.

Sports Hero is a one player game so you do lose the competitive aspect when playing with someone else and there are only four events albeit over three difficulty levels. Programmers are stretching the Spectrum to its limits - more events would have added a welcome variation.

Sports Hero is a one player game so you do lose the competitive aspect when playing with someone else and there are only four events albeit over three difficulty levels.