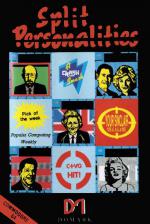 One of the problems with those little sliding block puzzles is that the piece that was needed down in the bottom right-hand corner, was always stuck up in the top left and by the time you had manoeuvred it to its correct position, every other piece was way out of position. Wouldn't it be easier if you started with an empty board and could bring the pieces on just as and when you require them? No, it isn't. Or at least, it isn't in Domark's highly original and entertaining new game.

The pictures that have to be assembled are caricatures of Maggie, Ronnie, Chuck and Di and the like. The board starts off empty with all the pieces out of sight in a "long queue", waiting for you to bring them on. Once a piece is on the board, you can slide it vertically and horizontally. The only problem is that you can't stop a piece when you move it. It only comes to rest when it hits another piece or a wall.

Doors keep opening and closing in certain parts of the wall allowing you to remove unwanted bits and push them to the back of the queue. Other parts of the wall are electrified and sliding a piece onto the wall causes it to bounce straight off again. There are other pieces too, that don't actually fit into the final picture, but may give you bonuses or kill you when you move them against similar bits.

Worst of these is a bomb which must either be removed from the board or pushed against a picture of a tap within five seconds if it is not to detonate and remove one of your lives. Lives can also be lost through running out of time.

The game's controls are very simple (especially with a joystick) but I felt that the response was a bit sluggish at times when compared to the Spectrum version. Also, the game hung up on me every time I tried to redefine the keyboard. But these niggles apart, Split Personalities is a highly original and fun game to play. Certainly Domark's best release to date.

A highly original and fun game to play.