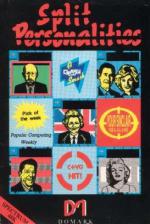 Take a block sliding puzzle and combine it with a popular satirical television show title. Now add an extra letter and you get Splitting Images, the first TV tile-in!

This ingenious avoidance of royalties hardly filled me with confidence. Nor did the blurb, burbling on about arranging the squares. Could Domark seriously be marketing a game as old-fashioned as this?

But begin to play the program and you realise its virtues. Dutch company Ernieware seems to have specialised in this sort of program and has added enough neat variations to create something new.

Put away all ideas of plastic puzzles and sliding squares around to create a picture. Instead imagine an arena with a store at the top left hand corner from where the picture sections emerge when you press fire. Three sides of the frame contain doors which are constantly opening and closing, and you can slide unwanted tiles through them to go to the bottom of the pile and re-emerge later.

There are also cracks in the wall, most of which flash on and off but one is constant. When a block collides with a crack it bounces back so you have to be careful with timing.

As you start to shoot sections of the picture from the store you'll find that corresponding squares are illuminated in a miniature completed picture to your right. You'll also find that non-picture squares emerge. Often objects associated with the person you're creating appear and if you bring me right ones together you score extra points. Arrange a collision between the finger on the button and the mushroom cloud and you'll bring about a cataclysmic bonus!

While you're trying to avoid crashing the wrong objects together you'll also have to watch out for bombs. These are neutralised by taps or can be kicked out of play through the doors, but whichever course you choose you've got to be quick because if the fuse burns down they'll explode and you'll lose a life. The same goes if you run out of time.

For some reason I found all this totally addictive, even though there's a tendency for bombs to appear in rather quick succession. Eventually you'll discover the technique to complete Ronnie Reagan within the time limit and you'll skim through Thatcher. But don't get too confident because more cracks appear in the wails and the doors open at a different rate. By the time you reach Alan Sugar you'll be panicking. Apparently Prince Charles lurks in there which makes me wonder whether we should really split heirs.

Not the most glam game of the year, but certainly one of the oddest and most unique. If tests of mental agility and strategy set against a tough time limit suit you then give these spitting images 'l'.

Not the most glam game of the year, but certainly one of the oddest and most unique. If tests of mental agility and strategy set against a tough time limit suit you then give these spitting images 'l'.