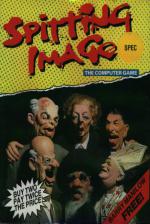 According to the prophecies of Spitting Image, there will be an apocalyptic war within the next seven years. And from the ashes of the world will rise one leader who will reign supreme.

At the start of a game, charicatures of six leaders are displayed - Gorbachev, Thatcher, the Pope, Ronald Reagan, the Ayatollah and President Botha - one of which the player chooses to be. Next comes an even bigger choice - who to fight. Yes - fight! In this wild and wacky Spitting Image world, the leaders battle for the number one position by means of a one-on-one punch-up!

This summit skirmish takes place over a suitable backdrop - if Thatcher is the opponent, number ten is in evidence behind the pugilists, while a rest home for Ayatollahs is the setting for the punch-up with... well, I'm sure you can guess.

The fighter face one another in traditional beat-'em-up style, and the objective is simply to defeat the opponent three times in five rounds. Both combatants are capable of head, body and feet hits, and also have a special move - Botha, for example, drops his pants and urinates on his opponent, while Gorbachev does a deadly Kossack kick. Each successful hit knocks a chunk off the fighter's energy bar, and if it drops to zero the bout is lost.

If the player wins, the title screen returns minus the defeated character, and another one is chosen. This continues until all headers are defeated, whereupon the player is shown an end sequence pertaining to that character, or the player loses a bout, which results in the termination of the game.

Much as I enjoyed playing Spitting Image, I was left with the distinct impression that there simply isn't enough game for your money. The graphics are utterly superb, with excellent animation and some hilarious touches (although I did stop and wonder what they'll look like on the 8-bit machines), but at the end of the day what you've got is a *very* simple beat-'em-up. That bugbear of many beat-'em-ups is in evidence - the one-move trick; in this case you just manoeuvre the opponent into the corner and let rip with a series of head punches to beat him with ease.

It's a shame there isn't just a little more in it, because the brilliant humour and many neat touches are wasted on the very weak gameplay.

It's a shame there isn't just a little more in it, because the brilliant humour and many neat touches are wasted on the very weak gameplay.