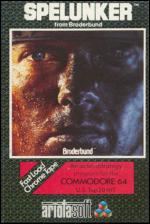 A spelunker is someone who scavenges caves. This ability provides the basis for one of those games that doesn't look up to much initially, but proves its worth with some play.

The graphics and sound are both poor and do nothing to enhance the game's appearance. Sprites are small, crude, and simple. Sound is mainly short bursts of single channel music, bloops, and incredibly annoying bat squeaks.

Spelunker is a form of arcade adventure set deep in a large cavern. This cavern is divided into six different levels of multi-screen exploration - each level being several screens in height and width. With only a small portion of the cavern displayed at any time, the screen scrolls in four directions to reveal any further playing area.

Each level consists of platform-like areas of rock connected by ladders and ropes. Scattered around these areas are numerous treasures and objects to be collected. Weapons such as dynamite and flares are to be found and utilised. The dynamite is to blow up impassable piles of rock, and the flares to scare off bats.

There are also various treasures to be found, ranging from ancient mining equipment to valuable artefacts and magic dust. On collecting treasures you gain extra points, and dust rewards you with either a new life, a stick of dynamite or a flare.

Separating each level are huge coloured doors and can only be passed when carrying the correctly coloured keys. There are also various dangers to be avoided or temporarily disposed of. Lava pits and jets of steam kill on contact, but small piles of rocks only bounce your man away if incorrectly jumped.

The ghosts of previous Spelunkers also inhabit the caves and appear at random throughout the game. Thankfully, you're armed with a phantom blaster, activated by a bash of the space bar. The problem is that firstly a lot of battery charge is used up on firing and secondly the ghost must be near enough to hit. Battery charge can be replenished, though, by collecting any batteries lying around.

I groaned inwardly at what looked like yet another grotty arcade adventure. This time the hero is fat and wobbling. It may be to American taste to have a beer belly quivering like a jelly but for me it's pretty revolting. The sound was as endearing as the hero, and the graphics are tacky. Even so, this game was fairly addictive and has o lot in store for a fearless adventurer.

Don't be deceived by the apparently poor presentation of the game on screen - there's great play lurking beneath the feeble exterior. With six large, interlinking levels to explore, all having incredibly tough and devious aspects about them, there's no chance of interest waning quickly. In all honesty I found it difficult to write anything, with Spelunker sitting seductively beside me.

The size and original touches compensate for the overall graphic simplicity and obvious age of the game. I enjoyed grabbing the objects, blowing up walls, lighting flares, and zapping ghosts, but then I'm a sucker for platform games. Like most of its kind it has that inexplicable hook that just won't let you put the joystick down, no matter how many times you die. Unless, that is, you keep thinking of the price and all the other platform games on your shelf.

Presentation 44%
Neat instructions, but annoying to have to reload start position.

Originality 35%
Dynamite, flares and other new touches to the scrolling exploration game.

Hookability 81%
Making progress in these caves is really compulsive.

Value For Money 79%
Another really enjoyable round of exploring, collecting and dodging.

Other Commodore 64 Game Reviews By GP

A really enjoyable round of exploring, collecting and dodging in a massive cave system with hundreds of treasures.