Published in Your Sinclair #10 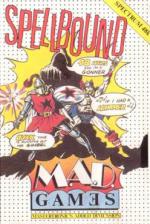 Gimbal rings, if memory serves, are the little metal hoops that you can find around your toy gyroscope, performing a function that escapes me. This fact, although having a tenuous link with the game in question, is totally useless. Spellbound 128, on the other paw, is not useless, in fact it's a very, very good game indeed.

Having wowed people on the 48K Spectrum, Magic Knight is now to be found strutting his flunky stuff in a much expanded and improved version of the Big Spec. The game, for those of you who missed it, is an arcade adventure, which follows the adventures of Magic Knight through the use of Windows, Icons, Joystick and Pointers. WIMP without the mouse, really. (Sort of MINJ, I guess!)

The Wizard Gimbal (geddit?) has been imprisoned in time by one of his own spells, and has sent a message back asking Magic Knight to rescue him. He does this by manipulating objects and casting spells, with the help of the various others of his mates that got sucked down the time-hole with Gimbal.

For those of you who enjoyed the game before or even if you never saw it on 48K, there are a few things about this new version which knock its illustrious predecessor into a tricorn hat.

Firstly the sprites are better, having their own colours and being more distinct. There's more text and more clues and even more rooms to explore. You can redefine the keys to your own fancy. It is, as they say, a distinctly more substantial game altogether, sorcery fans!

So, the upshot of all this is that Spellbound is now, if it wasn't before, a blippin' brilliant game, deserving a place in every big Speccer's collection, forthwith. Or even fifthwith.

Spellbound is now a blippin' brilliant game, if it wasn't before, deserving a place in every big Speccer's collection.