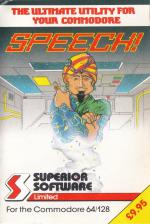 Anthony Clarke has been chatting up the local Commodores with the aid of Superior Software's Speech. Here's how he got on...

Superior's speech synthesizer takes up 9K of the C64's memory and, as the advert so blatantly tells us, requires no extra hardware for operation. The system includes its own commands into the Commodore BASIC, although to use a command you have to put a * in front of it. In this way you're given control over the pitch of the speech as well as being able to enter speech directly by using the *SAY command.

*SAY takes any string, well almost as it doesn't like any shifted symbols or strange word structures, and converts it into phonemes. Phonemes are basic sounds that make up normal speech and when strung together make a fairly recognizable sound. Unfortunately, the processing time taken to work out the required phonemes is abysmal at about five seconds - after which, the screen goes blank while the sentence is said. The *LIGHT command leaves the screen on but the quality of sound is reduced.

The *PITCH command goes some way to helping *SAY command by setting the speed at which the phonemes are spoken to an optimum rate for what is being said. It works, to a degree, but doesn't improve the quality of the speech much.

The *SPEAK command is much better to use and allows direct entry of any of the 49 phonemes so that the best sounds can be made. This does take time, though, and good results are not easily produced.

The speech program comes with three other programs, the first is a demo that tries to show you the good points but manages to put me off.

The second is an educational program, similar to speak and spell, though it should only be used to teach the household robot as it takes quite a while to understand some of the words. The program does have three skill levels, and, if you break into the program, the ability to change the questions (ho ho).

The last program is SAYFILE which recites the contents of any file on your disk, be it a basic program, sequential file or a user (machine code) file. Unfortunately, the speed of execution is terrible, although I suppose it could have uses in reading back a page of hex to check for errors.

As far as I can see, this sort of utility has limited potential and appeal. If a more realistic version was to appear then you could also hook up an Optical Character Reader which allows the blind to 'read' normal books. Superior's speech is not clear enough for this, and takes far too long to respond to an input.

If you're interested in this program then you should be able to buy it from most software shops at a price of £9.95 on cassette and £11.95 on disk.

Um, well, it works. It speaks. But as far as I can see, this sort of utility has limited potential and appeal.
Logout