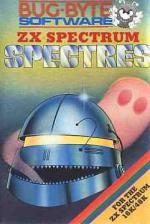 The latest offering from Bug Byte for the 16K or 48K Spectrum is Spectres. For the price of £8 I was certainly expecting an excellent copy of a 'certain arcade game', and I am pleased to say that, although it is slightly different to the arcade game, in my opinion it is better!

Before I tell you some of the details of the game, I would like to comment on the packaging, which is first class. A colourful artworked cover (obviously to attract prospective buyers) and detailed instructions which blend a storyline in with the objectives of the game.

As the game is being loaded into your computer, a message appears in the 'PAPER' area of the screen telling you to wait. From then on, the game is run automatically and the Break key is disabled.

The objective of the game is to help your little man, Eddie the electrician, re-wire the mansion (the maze) by fitting bulbs. There are, however, four Spectres in the maze which have to be avoided. Eddie is aided in his task by four light generators which change the hunters into the hunted. The duration of how long the generators are kept on for is determined by how much fuel Eddie has collected.

Spectres is fast, colourful and very addictive. When I first received Spectres I spent nearly six hours trying to clear the first maze! Each Spectre has a different colour, name and character. The graphics are outstanding and obviously a lot of thought has gone into deciding the shape of the Spectres.

Sound is used effectively throughout the program, but due to the internal speaker inside the Spectrum it is difficult to hear. (I especially like the 'sparking' noise when a Spectre is ignited.)

After the first maze has been cleared, a totally different structured maze has then to be cleared with your score and men left carried over. Altogether there are three different mazes.

However, I do have a few quibbles. First up, on my cpy a bonus 'man' is awarded every 3,000 points and not every 2,000 points as stated on the inlaycard. Also, when you reach a certain level (either 9,000 or 12,000 - I can't remember which as my Spectrum is with Uncle Clive at the moment!) you get a full set of 'men' and from then on, Eddie is invincible.

But even with these quibbles, Spectres will become a standard by which other similar games will be judged.

A standard by which other similar games will be judged.