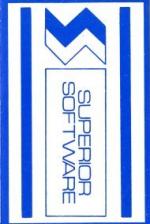 This game is based on the arcade game Defender, but has a few differences. For instance, you are only defending yourself; there are fuel dumps; also there is no scanner nor a reverse facility (neither is really necessary).

The player is greeted by a strange sound and an option to choose instructions. These are very good, very explicit and straightforward, and are to be commended.

Next you are invited to choose which skill levels you wish to start playing the game on. 1 is easy, 6... well! You may change skill level after a game by pressing "Escape", but this has the unfortunate effect of resetting all the high-scores (there is a top five table).

There are six types of alien: mutants which move around randomly; swarmers which move away from you; trimorts which move randomly and need three hits to be destroyed; baiters and baryons move towards you; asteroids also appear to test your skill. All "living" types fire only when horizontally level with you. The last two types mentioned can only be destroyed using a smart-bomb (you are supplied with three of these).

You have a spaceship equipped with a laser, as well as the bombs. "A" and "Z" control vertical movement, "Copy" fires the laser, "Delete" thrusts (burning fuel at an alarming rate), and Return fires a smart-bomb. The rapid-fire really is rapid, and the game is enjoyable to play in the main.

However, there are one or two major drawbacks. The graphic quality is poor, the landscape is rather flat, and I have seen some of the other characters before. Defender perhaps? Still, it is based on it. The ship is good, though, and even has flames at the back.

Another niggle is the quality, or lack of it, in the sound department. A little more effort here would have been in order.

Summary: fairly good, but does not take advantage of the Beeb's facilities. Better suited to a (cringe!) Spectrum.

Other BBC Model B Game Reviews By Dave Reeder

This Defender clone is fairly good, but it does not take advantage of the Beeb's facilities. A little more effort with the sound should have been in order.