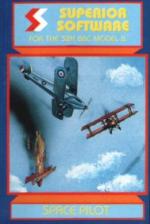 In Space Pilot, your task is to guide your space craft around the skies, shooting down the waves of various types of flying machines. On the first screen your targets are First World War biplanes and later screens feature spitfires, helicopters, delta wing jets and UFOs.

The first wave is fairly simple and easy to dispose of, not putting up much of a fight. After shooting down all the biplanes, as a finale you must shoot down the airship. The later waves of aircraft have missiles which home in on you and are armed with guns too.

Points are scored for everything you manage to hit and bonus points are given for rescuing the parachutists that float down from time to time.

The action takes place on a horizontally and vertically scrolling screen with white clouds drifting by whilst the enemy aircraft roll and turn around you.

There are only three keys to operate in Space Pilot: left rotate, right rotate and fire, but there is a joystick option. You can freeze the game and also put your name on a high score table.

Both the sound and the graphics are very good and the game is fun, even if on the fairly easy side. I found that the younger members of my family took to it because of this, and it quickly became a favourite of theirs. It gets a recommendation from me as a game for the younger player but that's not to say adults wouldn't enjoy it too.

Both the sound and the graphics are very good and the game is fun, even if on the fairly easy side.