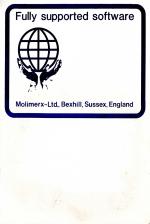 This version differs from many Space Invaders in that it allows the user to set a large number of variables at the commencement of any game. Such attributes at the accuracy and number of alien bombs, games speed, bomb type and scoring are just some of the customizing that may be set.

Sound is also available, though I couldn't get the benefit of it on my TRS-80 model III.

Alien space ships gradually move down the screen, attacking your laser base which you move along the bottom of the screen by the use of the up and down arrow key. The aliens drop bombs from their ships and should you be hit by one of these you lose one of your laser bases. Graphic blocks are conveniently sited for you to hide behind but gradually get destroyed as they are hit by your fire or bombs from the aliens.

The game is written in machine language and is, therefore, capable of very fast action at the higher level of difficulty. The game would probably not be of interest to owners of other invader programs but the level of customizing that is provided makes it a very worthwhile version.

Written in machine language and... capable of very fast action at the higher level of difficulty.
Logout