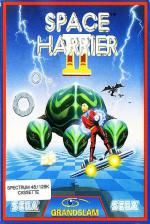 What's going on? I don't understand? Can somebody please explain. Here am I reviewing Grandslam's Space Harrier II which costs £9.99, and I'd like to tell you all how good it is, and how much fun I had playing it.

The thing is, as you read through this issue you'll eventually get to page 82 where you'll see our Chris has reviewed Space Harrier I which now only costs £2.99. Now, I've had a look at both games, and call me a div-ead if you like, but I can't see much difference between the two.

You are Space Harrier. You're stuck in a Fantasy Land made up of 12 levels. You must run across the chessboard patterned ground towards the mountains shooting trees, bushes, creatures, floating rings and end of level monsters with your laser gun until you have got rid of Dark Harrier, the nasty man who rules the land.

I have been told that the graphics on the full price version are much better than the budget. Also, there's some sampled speech, and the end of level monsters look slightly different. And, whereas in Space Harrier the monsters came at you from the bottom of the screen, the new version has them coming in from top AND bottom (wippee-wow!).

Sorry, it still has the same feel to me. Now, don't get me wrong, it's not that I don't like Space Harrier II, because I do. You can play it for ages as there are plenty of levels to get through and the action is very fast and furious.

The only problem is that I really don't want to encourage you to spend a tenner on something that is just as good for three quid because it makes me feel like a bit of a cheat. It all would have been perfectly fine had those sneaky sods at Elite not thoroughly stolen Grandslam's thunder by releasing a virtually identical game for a third of the price.

Good game, shame about the price.

It all would have been perfectly fine had those sneaky sods at Elite not thoroughly stolen Grandslam's thunder by releasing a virtually identical game for a third of the price.