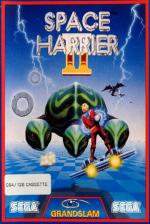 Contrary to what the name suggests, Fantasy Land is not a happy place. Well, not since it was tyrannized by the Dark Harrier. Sounds evil...? Well, by golly, he is!

Exactly what Mr. Harrier has done wrong is not known but you can be sure that he's a pretty nasty guy; it says so in the extremely concise (i.e. virtually non-existent) scenario! But anyway, just imagine a cross between Dracula, Darth Vader, and Des O' Connor, and you should have some idea quite how awful he is.

To defeat this evil tyrant, a really goody-goody hero is required. Unfortunately, all the Fantasylanders have got is a dodgy geezer, going round on a hoverpad and with a gun so big he has to carry it under his arm!

Our hero can start his mission on any of twelve levels, each of which has a huge mother alien at the end of it. If all twelve are completed, he gets a showdown with the Dark Harrier himself.

During the course of the game, bonus rounds may occur in which extra points and lives can be gained by blasting as many nasties as possible.

This is as subversive a piece of software as you're ever likely to see. I mean, alien genocide seems a totally immoral concept for a game if you ask me! In fact, when I was playing I made sure the aliens always won - who said I couldn't play games?!

But if, like most moronic humans, mindlessly destroying alien life forms (out of jealousy for their superior intellect, no doubt) is your cup of Vim, then this is an enjoyable but repetitive blast. The Amiga game benefits from fast moving graphics and mouse control. On the C64 however it doesn't really show any improvement over the mediocre original, which is better value on budget at £2.99.

Zzzz... Yawn... what? Oh, yeah, the comment! Well, to be honest, I never found Space Harrier that electrifying, so the prospect of a sequel didn't exactly excite me. And the fact that it's so similar to the repetitive original makes Space Harrier II very forgettable. It's more of a remix with different graphics rather than a completely new game. And seeing as the C64 original wasn't all that hot, this isn't a compliment.

The Amiga game is technically better with plenty of variety graphically but apparently Elite are re-releasing the 16-bit original wth extra levels - sounds like better value to me.

Presentation 64%
Good option to start on any of twelve levels, although with the multi-load, this isn't that desirable on tape.

Hookability 61%
Not exactly compulsive, but airly playable for a few goes.

Overall 55%
Not much different from the mediocre original.

Presentation 74%
A few options including start on any level. Fast multi-load.

Overall 65%
Okay if you're a fan of the Space Harrier coin-op.

Not much different from the mediocre original. I suppose you'll like it if you like the coin-op though.