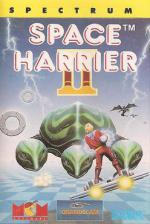 Just as Elite are releasing the original Space Harrier on their Encore label (see Budget), Grandslam come up with the imaginatively titled sequel. Get your jet pack warmed up, push the safety catch off that laser blaster sail prepare for twelve (count 'em!) levels bristling with more enemies than you can shake a pointy stick at.

Whizz past futuristic cities, vast alien factory sites and Greek inspired landscapes and avoid too much sight seeing - the attackers are just as varied as the backdrops: batmen, knights in shining armour, lions and even giant nuns (I kid you not!) spew death at you. As in the original you can either run along the ground, or if the reception is too hot, try out your jet pack in the sky, which is just as packed with foes. And what with the end of level bad guys all this amounts to trigger finger exercise.

Hang on, have I got the wrong game? This is Space Haller... no, it's definitely II (or Scramble Spirits?). You've guessed: this is basically the original game with a few graphical Improvements, but that may not be such a bad thing because It was rather good.

Programmers Teque claim the sprites are bigger and more varied than before, which is true. The amount of opposing creatures has certainly increased, and only the difficulty level is just the same (ie damn hard).

Nothing new, not brilliant, but still very playable: my opinion is, buy this - and the original too.

'All fans of Space Harrier cheer jolly loudly (hurrah!), because Space Harrier is... well… exactly the same! There is now a column up the right of the screen showing a flashy picture of a trendy woman and the Space Harrier II logo, but that aside. I can't tell the difference between the two. If you take a really close look I think you'll find the graphics have changed slightly. The same programming technique has been used to produce the 3-D effect which made the original such a hit, but that was in 1986. Basically, you dodge obstacles coming towards you and shoot nasty aliens. From level to level you do the same, the only changes being the look of the aliens and the colours used on the two monochrome halves of the screen. If you didn't buy the original Space Harrier this may be worth taking a look at. Otherwise you're really just buying the same game again!'

If you didn't buy the original Space Harrier this may be worth taking a look at. Otherwise you're really just buying the same game again!