Published in Your Sinclair #76 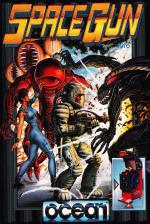 It is the yew 2039 and Dr Thad Oblong's Anywhere Engine has squashed the universe to the size of a laugh and the width of a blink. Long since freed from the drudgery of everyday toil, humanity is enjoying the leisure aspects of Anywhere travel; lunch breaks in different galaxies, cheap interstellar holidays and queue jumping in pan-dimensional restaurants. Stress has passed into medical history and everything in the garden is rosy.

However, the invention of the Anywhere Engine has brought its own problems. Humanity is not alone in the universe and regrettably the many and varied citizens of creation have not taken kindly to having their resorts overcrowded and their restaurant tables double-booked. Following the terrible Service Charge Wars of 2026, the races of the universe have lived in uneasy peace, although there are still remote worlds where wise men dare not walk alone. Dramatically, yet somehow predictably, it is on one of these worlds that the tourist cruiser SS Tourist Cruiser has crashed. Her injured captain tried gallantly to lead the passengers to safety but was unable to prevent a number of them from wandering off to photograph the local flesh-tearing monstrosities. Dutifully, but with marked reluctance, the good captain has been obliged to call in professional help - namely the hardest member of Space HQ's Beserker Division.

This is where you come in. In Space Gun, you are Lieutenant-Colonel Susan Paperclip.

So runs the plot to Ocean's brand new arcade conversion. Luckily you can skip the lot without fear of missing anything vital - essentially, Space Gun is Op Wolf 3. There's one important difference. Pretend you hadn;t noticed them before and gawp at those screenshots. Yup, this game has COLOUR. The huge variety of aliens scuttle, flutter and waddle towards you in blazing shades of every colour possible. Coupled with the Speccy-straining speed at which everything moves, the overall result is pretty stunning to say the least. probably the best comparison would be if you imagined Smash TV, but bigger, in 3D and more disturbing. Tickle my chin with an egg whisk and call me Mr Squeamish, but I'm a bit unsettled by a game that has you shooting the various limbs off aliens before blasting their heads apart in gruesome polychromatic explosions. It really is incredibly violent, and more than a bit yukky.

Still, I can't condemn a game just because I'm a scaredy cat. Playing Space Gun is a lot of fun - the action is furious and unrelenting and beasties spring out from every angle as you progress through both horizontally and 3D-scrolling sections. There are power-ups for additional energy and nastier weapons, and occasionally you'll find a lost tourist who needs a bit of covering fire as he stumbles aimlessly across the screen. On the presentation side, there are loads of neat touches such as the motion scanner, the little "Ouch!" balloons which appear when you're hit, and the way you can (ugh) shoot off the claws of the bigger aliens to stop them attacking you. In short, it's a slick piece of programming, chock-full of action, with tough and exciting gameplay.

Despite this, there's a major problem. To go back to the comparisons with Smash TV, no matter how frenetic that game became, you could always follow what was going on. here, once more than two aliens are on screen, it's practically impossible to keep track of your blue gunsight. Instead of which-beastie-should-I-hit-first strategies, you're reduced to blasting away at random in the hope of hitting something. It's a massive flaw, and one which affects the final rating enormously. Which is a shame, because Space Gun is a real attack on the senses. Basically, it looks fabulous, it sounds fabulous and it's jolly good fun... in the short term. Unfortunately, any lasting appeal has been effectively ruined by the fact that you can't work out what the heck is going on!

A gory giant of a game, in which it's sadly impossible to follow the action.

It looks fabulous, it sounds fabulous and it's jolly good fun... in the short term. Unfortunately, any lasting appeal has been effectively ruined by the fact that you can't work out what the heck is going on!