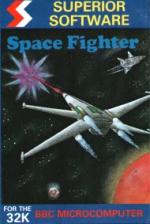 The Trimort is particularly nasty and has to be hit three times before it is destroyed. Mutants and Trimorts move randomly, Swarmers move away whilst Baiters and Baryons will try to ram your ship. Asteroids also appear on the screen and will blow you up if you hit them.

An unlimited supply of lasers are at your disposal but you have only three smart (i.e. homing) bombs needed to destroy the Baryons and Asteroids. A smart bomb will destroy everything on the screen so it is good strategy to use them when lots of Asteroids and Baryons are present. You are governed in your quest by the amount of fuel you have, but do not despair, you can replenish your fuel tanks by destroying a fuel dump.

The program loaded first time and the control keys are well chosen. Six skill levels are available and the instructions state that bonus ships are provided after 10,000 and 20,000 points, but I will have to take this on trust as I could not score above 7,000! A thoroughly enjoyable program, well worth the money - pity that the graphics used for the space ship are not as good as the rest.

A thoroughly enjoyable program, well worth the money.