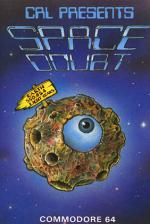 Let's hear it for the crew of the U.S.S. Omnibus! They boldly try to go where only real loonies have been before and often end up out to lunch.

Forget the disappointment of CRL's Blade Runner and run along to your local games store for a copy of Space Doubt. It's the most fun you'll have with your C64 short of trying to balance it on the end of your nose.

The idea of the game is basically this: You are in control of three astronauts inside the cargo ship Omnibus bound for the planet Niblondis with a hold full of grub for the starving inhabitants.

There you are having a nice, peaceful snooze inside your cryofreezer when suddenly the ship's automatic systems thaw you out. An emergency! Bogloids are attacking the ship and threatening your food supplies.

The Bogloids have this unhappy habit of drilling through the hull and bursting into the ship in droves. As the ship has many rooms and corridors you don't really know where the Bogloids will appear. But you do know you've got to stop them reaching your cargo holds and the food.

Once you've been defrosted you must dash for a power-block. These are your only means of defence, and your only means of repairing the gaping holes in the ship. They can be quickly exhausted as you zap the Bogloids - and used up in one go if you use one to mend a hole.

Fortunately power block dispensers can be found dotted around the ship. It's a good idea to make a note where you find them because things start happening extremely quickly once the Bogloids break in. And they aren't vegetarians. They quite like the taste of humans wrapped in spacesuits - so don't let them get too close!

You see a sort of split-screen view of two levels of the ship on each screen. You can move between levels by using the elevator beams which connect each floor at various points.

These can be reset to go up or down by simply moving your spaceman up to the control panel and pressing the fire button. It takes a bit of practice to jump out of the lifts at the right time. Careful timing is needed unless you want to stay zapping up and down in the beam for half an hour!

The graphics are excellent and have an original cartoony feel to them. The sound, provided by CRL's friendly Cyborganist, is fun - a mixture of Close Encounters and James Bond!!

There's no doubt that Space Doubt will be a big hit. If it isn't I'll eat my Bogloid - or should that be the other way around?

There's no doubt that Space Doubt will be a big hit. If it isn't I'll eat my Bogloid - or should that be the other way around?