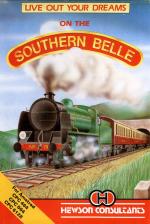 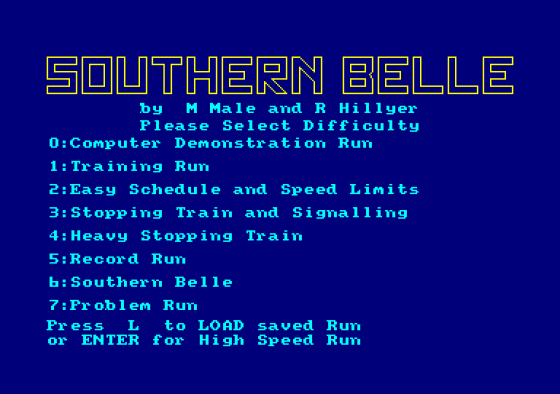 'Live out your dreams,' the cassette inlay promises as you drive a King Arthur class steam locomotive from London Victoria to Brighton. There are seven types of run presenting different problems but all are over the same 50 and 3/4 mile track through seven tunnels, numerous stations and landmarks.

The display shows you the view from the tender of the instruments in the cab and the track ahead. As the train moves you pass through the landscape, drawn in black and white and mostly bare. Tunnels, bridges, stations, permanent way workings, signals and Battersea power station all go by as you chuff along, smoke pouring out of the chimney.

The cab is full of displays to indicate the status of the engine but you don't have to control all of them. On the right of the screen are indications of the coal and water supplies, speed, the signal ahead, gradient, distance along track and time. There are nine controls to alter the performance of the engine, some of which you can leave to the computer if desired. 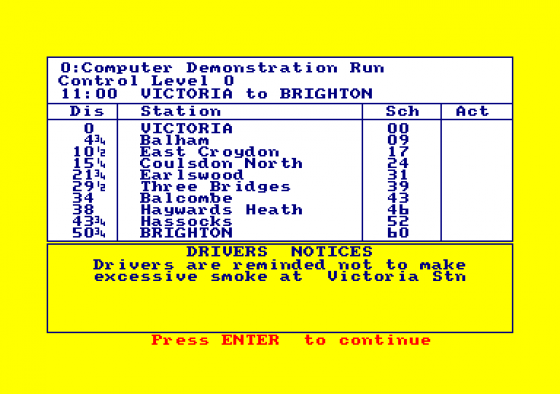 The regulator, cut-off and vacuum brake are always under your control and determine the speed and partly the economy of a run. The regulator determines the amount of power to the wheels and thus the speed and acceleration. The cut-off works in tandem with it. determining how much steam enters the engine cylinders and thus how much power they produce and at what efficiency. The brake works on several levels from light, medium, heavy to emergency, although the company and passengers will object to the latter.

The next features you can introduce are the blower and whistle. The blower is used when the regulator is shut off or when the tram is in a tunnel since it stops gases building up in the firebox and causing an explosive blowback into the cab. The normal passage of steam usually sucks gases out but the blower uses live steam when no steam is used for power and is therefore wasteful. The whistle is a warning device at tunnels and stations and. aside from being fun. wastes steam as well.

The injector and dampers are harder to use and control the water level m the boiler and the airflow to the fire. The water level must not get too high or low or disaster will result. The air flow controls the temperature of the fire (indicated by a thermometer), the rate of fuel consumption and the type of smoke produced. These are very tough to gauge and have to be kept a constant eye on. 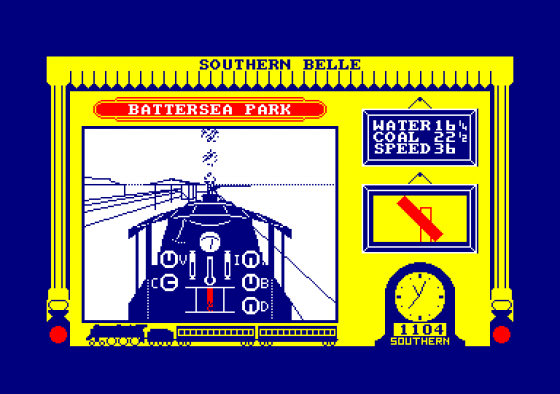 The seven runs involve many different timetables and problems. Some runs involve fast economical running while others involve stopping at stations for passengers and at signals. Sections of the track have speed limits where you may derail if you speed and lots of other safety penalties can be incurred for bad stopping, failing to whistle or overshooting signals. At the end of each rim you are marked for your timekeeping, economy and safety to produce an overall pass or fail.

The graphics are bare but adequate but the puffing noise is nice, even muffling in tunnels. The controls can be complicated to learn so this simulation won't appeal to all - but steam-tram fanatics and simulation freaks will love it. The atmosphere is terrific (smell that smoke) and the options mean its got lots of lasting interest.

Although not even I am old enough to remember steam-trains, I couldn't help feeling nostalgic about this game - perhaps because of those childhood train sets. It certainly makes a change from yet more flight simulators, and I for one would rather aim for Brighton than the stars.

P. Marvellous atmosphere.
P. The one and only steam-train simulation.
P. Lots of options and runs.
P. Tough game to master.
P. If you like trains, then you'll love this!

N. Controls may be too complicated (too realistic?)
N. May not appeal to all tastes. 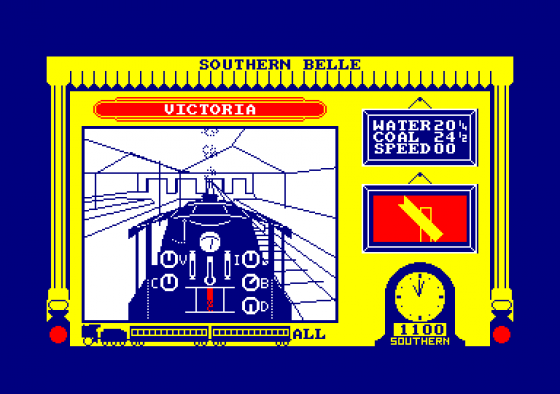