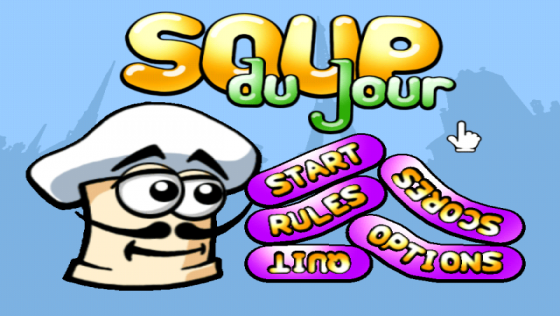 As a new reviewer for RGCD, there's no feeling quite like being able to bring you coverage of a cutting edge, flawless game which stretches the technical limits of its platform and really pushes the envelope in terms of innovation. No, indeed.

Pfft, stuff that. Let's review another match-three game instead! Yaaaaay!

Wait! Where are you going?! Don't flip on to the next review just yet. And stop groaning, you at the back. You may yet be pleasantly surprised. Still, I won't try to persuade you away from the basic fact that yes, Soup du Jour is a match-three game, albeit a pretty well-executed one. If you have an allergy toward the genre (a candy-based one would be particularly dangerous in this case), or perhaps you dislike French chefs, then maybe it IS best for you to skip onwards. shniff... it's okay, honestly, I don't mind... 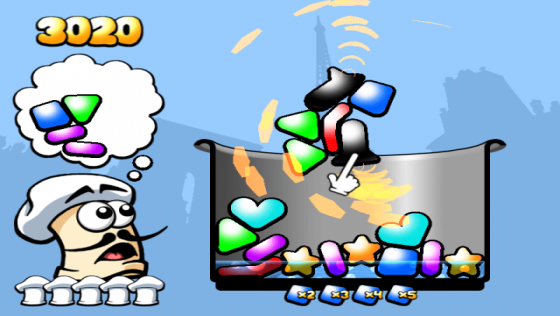 Enough tomfoolery. Let's get down to the business at hand. Digital Eel, famous for Plasmaworm, Dr. Blob's Organism, and their Infinite Space coffee-break galactic exploration titles, have dived well and truly into the mainstream casual market with Soup du Jour. To their credit, they've done what many haven't by at least trying to add something new and fun into the mix - quite literally, in fact, and not entirely without success.

Playing as Le Chef, your job on each level is to help him create a masterful candy soup du jour. Candies are dropped into the pot at regular intervals, and as you'd expect by now, they can be made to pop by arranging four or more of them so that they touch. If you manage to connect five or even six pieces at once, you'll get a bigger bonus. Popping candy increases the amount of soup in the pot, and once it's full to the brim with the rather unusual concoction you'll progress to the next level.

So far, so average. What makes the game worth playing, I hear you cry? Soup du Jour's secret ingredient, that's what - a quirky physics engine! Yes, I know it's not all that secret since Blast Miner and several others got there first, but stay with me a while longer. Instead of swapping candy pieces on a preset grid, you've actually got to drag them around the cooking pot with a suitably "realistic" rubbery behaviour using the mouse pointer as Le Chef's unnaturally stretchy finger. Bumping one or more pieces together will join them with a weak elastic link so they can be moved as a group, but it's also possible to split them up again if you push another piece between them or try and move them too suddenly.

While the game starts off at a sedate pace, it isn't too long before chaos starts to break out as your cooking pot gets smaller, wobbles faster and the Kitchen Gremlin makes his off-screen presence felt. You'll have to deal with bombs (which explode and blow your ingredients out of the pot), rockets (which blast in and out the pot destroying several candies along the way) and giant-sized candy pieces (which do nothing except take up lots of room in the pot and be generally awkward to move). Then there's the de facto increase of variety in candy types for you to match up during the later stages. With all this going on, you have to make sure that your pot doesn't overflow with ingredients; for every candy that falls out of the pot and off the screen, you lose a life, and you only have five. It's easy enough to catch falling pieces and drop them back in the pot, but only if there's room for them to stay there - hence why the giant pieces are such a bother. Fortunately your lives are reset at the start of each level, giving you a bit of leeway to go for the riskier combos early on.

Visually Soup du Jour is perfectly fine, although it's not in the finely polished realms of, say, a typical Popcap game. Antialiasing on the candy edges wouldn't have gone amiss, but it's a minor thing (and hey, this is a retro mag so we're not bothered about such things, are we?); some variety in level backgrounds could have been a fairly straightforward addition as well. Somewhat more satisfying are the sound effects and typically French music (I hope you like accordions). They combine together well to provide an amusingly cartoony feeling - the rubbery squeaks while you drag candies around, especially in a full pot, are certainly worthy of a chuckle or two. However, one thing that did surprise me is the glaring omission of an "endless play" mode. Instead you're left with only ten levels that you can complete in around fifteen minutes, or perhaps faster once you've become familiar with how to play the game. The measly cost of $9.99 (£5ish) for the full version becomes a steep price for such a short length of gameplay, even if the novel physics do make it replayable a few times. Still, there's always the demo, and the highscore table might encourage some competition between family and friends.

All in all, Soup du Jour is a fun game to play for a few minutes at a time and is a great coffee-break boredom killer. But if it weren't for the physics this game wouldn't even have gotten a look-in. If you like match 'em up games, French chefs with dodgy moustaches, accordions, or sweets that act like balloons, this game is for you - otherwise, you'd best try the Ploughman's lunch instead, it's really very good, got three different types of cheese in it too and incredibly they don't disappear when you line them up...

A fun game to play for a few minutes at a time and a great coffee-break boredom killer. 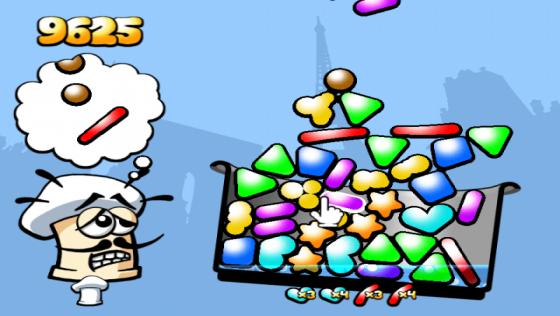 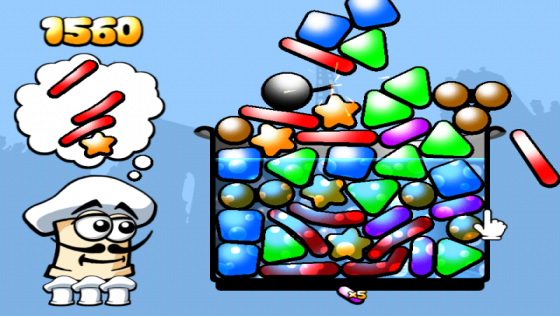