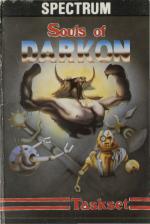 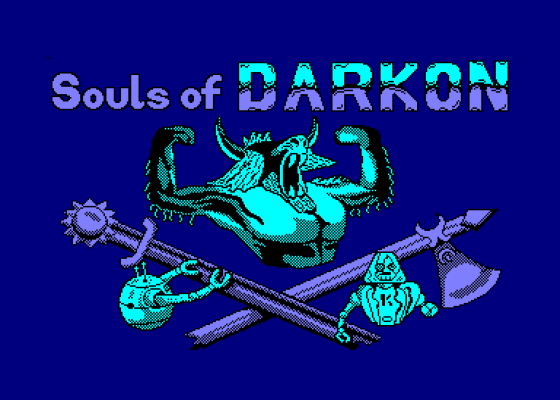 The brief background story to this game is rather ludicrous, for you are cast as a bionic warrior on the planet Megron, laid waste by the evil Darkon. With nothing but a faithful robot watching over you, you are presumably (for it doesn't say as much) sent to find and overthrow Darkon.

The environment in which you find yourself will pass for good old mother Earth anyday, with trees and mushrooms, not to mention a log hut complete with woodman, the remains of a brewery, a blacksmiths, and the odd fountain and monument here and there.

The game takes a bit of getting used to, as the text is so horribly gothic that it is almost indecipherable at first.

The screen has an unusual layout, the top half describing the location in a narrative sort of way, with a picture below it to the left. The computer's replies are shown to the right of the picture, whilst the player's commands are entered at the bottom of the screen.

Since the descriptions are narrative, it is necessary to type LOOK for a list of exits and objects. There are three facilities for HELP. One is to simply type the word, but more often than not you will be referred to the other two methods: LEGEND and VOCAB. The latter is simply a list of the valid words, whilst LEGEND may tell you a bit about the background of the location.

The graphics are a let-down, consisting of blue line-drawings on a green background, but they are fast, and they do serve to identify where you are without the necessity of having to struggle through the location text.

There are a couple of characters to be found early in the game - a toiling woodman, and a guide. Both seem rather wooden, for I have not found a way to make them listen yet, let along engage in a useful conversation, despite paying the guide for a service - he just accepts the money and then continues to ignore me! Perhaps I am using the rather limited vocab in the wrong way.

There seems to be a glitch or two with the replies, as when having typed GO OUT to leave the hut, the 'narrative location' text told me I was hovering over a swamp, yet the picture showed I had remained in the hut, a fact confirmed by the subsequent reply to typing LOOK. One or two other strange messages appeared from time to time, as well.

For all that, the game is quite a good one when you get used to it.

The game is quite a good one when you get used to it. although one or two rather strange messages did appear from time to time.