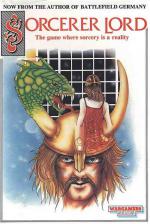 At last! A game that looks like a wargame and plays like a wargame! Let the canikin clink long into the night as we pit ourselves against the mighty Shadowlord!

Sorceror Lord comes in a nicely designed and printed cardboard box, just like the ones that real (board) wargames come in, instead of those pop-album-style plastic cases. Inside you find an exciting assortment of goodies - a handbook (beautifully illustrated, simply laid out and clearer than most we have seen lately) and a handy card summarising symbols, terrain preferences and so on, to prop up beside the TV screen. There's also a large map of the Lands of Galanor printed on parchment-like paper to lend an air of romance and authenticity to the proceedings. With all this plus a copy of PSS's glossy catalogue, we already begin to feel that we're getting value for money.

The game, written by the author of Battlefield Germany, is an imaginative fantasy conflict at tactical level. You are the Sorceror Lord, defending Galanor from the hordes of warriors and riders under the command of the Shadowlord (played by the computer). The enemy advances quickly in large numbers, at high speed and with devastating effect. It's a waste of effort to try to halt them at first. The better tactic is to send your leaders to visit the fortresses and citadels of the land to recruit as many men as you can muster.

The warriors at your service include the Barbarians of Savantor, the Elves of Imryth, and several others, each with their own preference for different terrains, carrying different arms, and with leaders skilled in Sorcery to different degrees. All these features are taken into account as you mobilise your army and throw it against the forces of the Shadowlord. It's an easy game to get into, yet it may take you some time to master its intricacies. We found the computer opponent most formidable, even at Level 1, possibly because of its new routines based on artificial intelligence techniques.

Graphics are good and non-fussy, though the 'ancient script' of the text is hard to read, especially as many messages are not on the screen very long. There is a large scrolling map (based on hexes, in true wargame style), with an overall strategic map on call whenever you need it. The information appears just above the map and the screen is uncluttered with graphical bric-a-brac at other times. This could be taken as a model for other wargames. Oh yes, and - wonder of wonders - there are no stupid sound effects either! The control system is easy to learn and operates perfectly.

Sorceror Lord allows you to concentrate on the game itself without distractions. Whether you are into fantasy or not, the tactical aspects of this particular wargame will hold you spellbound. Recommended.

Whether you are into fantasy or not, the tactical aspects of this particular wargame will hold you spellbound. Recommended.