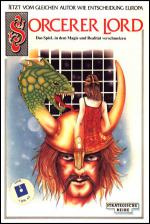 PSS is one of the few British software houses regularly producing strategy software for the Commodore.

With such a large body of high-quality disk-based games available (admittedly, at prohibitive prices) from America in this area, British companies have a difficult job to compete in what is, sadly, a limited market over here. In America, they tell me, it's a different story: the average age of the game software buyer is higher, tape access is unknown, and thinking games outstrip the shoot-'em-ups. Unfortunately for PSS, releases tend to have a slightly homegrown air in comparison, simply because they're levelled at a different market. It's ironic that British arcade games should be, on the whole, more sophisticated and interesting than those that come from America because these are the ones designed for the local mass market.

'Proper' fantasy wargaming is something that has only recently become widely popular in live gaming, and it's not at all common on the computer. For some reason, games designers seem to imagine that the buying public don't want conventional wargames with full fancy-dress fantasy backdrops. If dragons, orcs and wizards enter the picture, the game system plunges to the simplistic level, giving the player a chance to throw a few fireballs about and little else. Combat sequences in pseudo-roleplaying fantasy games are often extremely detailed and sophisticated, but there's a lack of straightforward cardboard counter army-manoeuvring wargames that happen to have legions of elves and chaos dwarves instead of German and Allied divisions. Sorcerer Lord is one of the rare attempts to do something of the sort.

It's set in the Lands of Galanor, three kingdoms of human races south of a deep and dark region of mystery known as the Shadowlands. For several millenia the Shadowlands, apart from playing host to a race of powerful and decadent sorcerers, have given their southern neighbours no trouble. But when a new Shadowlord comes to the throne, he's ambitious. He wants to march into Galanor, recapture the Rune Rings which his race enchanted when they ruled the whole land, and re-establish the Shadowland empire. So, in the best tradition of these things, be proceeds to gather an army of vile creatures conjured up by a kind of enchanted genetic engineering, and marches them southwards under the command of humans enslaved by the Shadowlord. Not unnaturally, the player takes the part of the upstanding clean-shaven men of Galanor. Fantasy wargames of any type never let you be the evil chaos hordes...

There are three difficulty levels to choose from, and the game gets underway without further preamble. The screen map bears a disquieting, because it was distinguished by a hexagonal lack of atmosphere. Fortunately, in Sorcerer Lord, this is remedied by the inclusion of a nicely-produced map printed on fake sepia paper. This clearly shows and names all the fortresses, and gives a good indication of the terrain. What appears on the screen is a rough and visually unattractive hexagonal approximation of this, although in terms of moving units about the countryside it's much more exact. My only complaint about the paper map is that it doesn't show the boundaries between the Shadowlands and Galanor and between the five nations of Galanor itself.

The Shadowlord starts the game in possession of eight fortresses. The player is in control of large number of fortresses and several citadels, and all of the rune rings; but this does not mean that he has large forces immediately at his command. Despite being under the collective guidance of the Sorcerer Lord of the title, most of the leaders of Galanor have not realised the danger that their land is in, and it takes a few turns for them to become aware of it. Without leaders, troops cannot be moved. There are only three leaders awake at the start of the game, but in subsequent turns other leaders become aware and materialise for use at their own fortress. The only really efficient way to muster forces is to send the leaders already under your command on recruitment drives.

Armies are represented by units which contain warriors, riders and a leader. Information about each is displayed at the top of the screen, giving the name of the leader, including his race - which apparently has some effect on his ability to fight in certain terrain - the number of warrior and riders under his command, his leadership value, his sorcery ability, the general fighting ability of his troops and movement points available. It's impossible to do anything without a leader, and a leader, once killed in battle, is irreplacable. At the start of the game they're plentiful.

The rulebook gives some good imaginative backing to the various races that go to make up the player's forces. There are five races: elves, barbarians, mountain warriors, Men of Herdach (hardy northern types) and Men of Rovanium, the most southerly and the most civilised. Particular troops fight best under home conditions, so the Mountain Warriors of Morgalion are most proficient on the mountain ranges and the elves excel in woodlands. The types are distinguished on the screen map by the shield of their leader.

Certain aspects of this game may begin to sound familiar, and it's true that elements of the design seem to be borrowed directly from Doomdark's Revenge; particularly the need to increase your initial force by recruiting the help of friendly leaders, and the overriding importance of commanding officers if you want to do anything at all with your troops. I have no quarrel with honest plagarism - a good idea is worth re-exploiting - but it's fair to warn the prospective purchaser who might be attracted on the strength of the similarity that Sorcerer Lord, absorbing though it is, has very little of the atmosphere of Doomdark's. This is almost entirely due, I'm afraid, to the unattractive on-screen presentation.

There are five phases in each turn, starting with the Shadowlord movement. This opens the game and tends to induce an initial feeling of panic as the Shadow Legions move rapidly out from their strongholds and proceed to capture at least two of the player's castles before he has a chance to do anything about it. Being eveil chaos spawn, the Shadow Legions can move at a greater rate and can cross mountain ranges and water with unfair ease. Shadowlord combat follows movement, in a separate phase. Each battle is resolved separately, though rather rapidly; much as in Battlefield Germany, although you don't have to press a key to move onto the next battle. Combat is initiated by moving a unit on top of an enemy unit, and is influenced by the leadership rating of the commander, the fatigue level of the troops, the numbers - obviously, though fortification makes a great difference - and whether or not sorcery is involved.

The role played by sorcery is cleverly balanced. For a start, you may be in battle with a leader who has no sorcery ability at all, and the Shadow Legion commanders always have. But what matters more is which side controls the rune ring nearest to the battle, because if there's to be any sorcery at all, that side is able to use it to its own advantage. The nearer the battle is to the rune ring, and the greater the sorcery ability of the commander, the more powerful is the sorcery summoned. Sorcery ranges through five degrees from weak, which alters the weather conditions in the caster's favour (presumably it only rains on half the battle field) to devastating, which brings a host of demons to the caster's aid.

Exact casualties resulting from each battle are flashed onto the screen, rather to rapidly for comfort. If the defeated army is not entirely wiped out, it is forced to retreat to an adjacent position.

Between the enemy and the player's movement and combat phases is the Galanor Alliance phase, in which leaders around Galanor become alert to the danger and are available for use. Later, when all leaders have been prodded into awareness anyway, this phase becomes more important for the reinforcements it offers. Reinforcements are quite generous, and represent recruitment of troops from the countryside surrounding the fortresses. Unfortunately, it's often the case that 500 riders materialise in a stronghold miles from the main action and beyond the immediate reach of any leader.

The player's movement and combat phases follow. During the movement phase, if the player has a leader in a fortress he can be used to pick up any troops that may be there to increase his own army. He can also deposit troops, to be picked up later by other, perhaps more powerful, leaders. Movement is affected by terrain in the usual way, and in fact just about every geographical feature.

The gameplay centres around the taking and defending of fortresses, and rune rings to a lesser extent. If the Shadowlord holds any fortress or rune ring of Galanor for more than twelve turns, the player is defeated - in theory. I must admit that in practice it didn't really seem to work like that. Galanor certainly falls if the citadel of Yarthos, deep in the south, is captured.

When I first played this game on the Spectrum, haunted by memories of Battlefield Germany and unsympathetic to its clumsy presentation. I was impatient with it and unable to enjoy it. However, meeting it again on the Commodore I found that I was able to get thoroughly embroiled in it. My second game, which totally absorbed me, lasted with only reluctant breaks for ten hours and had me, after a slow of struggling start, beating the chaos spawn back beyond the boundaries of their own land. This was on level one, and I didn't trust myself to start on another game at a higher level.

One aspect of the presentation infuriated me thoroughly. When, after having played for so long I achieved what I thought was a winning position and was preparing to attempt to invade the Shadowlands themselves, I was abruptly turned out of the game with no acknowledgement whatsoever. Not even a bland "Congratulations, you have defeated the evil menace of the Shadowlord". This is unforgivable.

On the whole, though, I would recommend Sorcerer Lord as an exciting and eminently playable game that takes a little getting into.

Presentation 65%
The packaging is good, but on-screen presentation is pretty deadful for a game with professional pretensions.

Graphics 61%
Not actually an impediment, but uninspiring.

Rules 80%
Play is well and systematically described and there's reasonable background material, although the illustrations look like they've been copied from an early Citadel miniatures catalogue.

Overall 85%
Highly recommended for the game, if not the aesthetics.

Highly recommended for the game, if not the aesthetics.