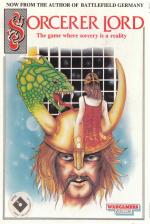 The battle takes place in the mythical land of Galanor. Galanor has been invaded by the evil forces of the Shadowlord and you control the nations of Imryth, Savantor, Morgalion, Herdach and Rovanium.

At the beginning of the war you control few armies and your first objective is to alert all of your potential allies of the threat of invasion. To do this you merely enter the fortress or citadel of the army that you want to join you. While you are gathering your forces, the Shadowlord's armies are descending from the north destroying all who stand in their path.

Imryth is the land of the Elves, the lords of the forests. They are the finest archers and move swiftly through woods. The Barbarians of Savantor are masters of horses and they have no foot warriors. The deserts and plains are home to them and here they fight at their best. Morgalion is home to the Mountain Warriors. These sturdy folk are skilled in siege warfare and take with them siege engines to help in the capturing of fortresses and citadels. Out on the open plains they feel insecure and don't fight as well. The men of Herdach are cousins of the Morgalion's and they occupy the colder northern regions of Galanor. The men of Herdach and Morgalion fight only on foot. The men of Rovanium are both foot and mounted soldiers. The mounted troops are fewer in number, but they are heavily armoured knights. Some Rovanium leaders are skilled in the arts of sorcery.

Armies of the Shadowlord come in foot and mounted varieties. Both fight well and fatigue less easily than men. Shadow Legions are commanded by evil men who often possess the power of sorcery. The Shadow Legions suffer less from terrain and have the power to travel across water.

There are five phases to a game-turn Shadowlord movement phase: Shadowlord movement phase, Shadowlord combat, Galanor allies, Galanor movement and Galanor combat. During the movement phases each army is allowed to move with normal or forced march. Forced marching gives armies a great number of movement points, but increases their fatigue. Combat occurs whenever you and your enemy occupy the same hexagon. Fortresses and citadels help the defender and the terrain also affects the combat of the troops. The allies phase is when more of the Galanor forces get mobilized or reinforcements arrive at mobilized fortresses and citadels.

If you start a turn in a fortress or citadel then you can use the garrison option to either station or recruit troops. Other options allow you to get a war report, display a strategic map, display the terrain type or end your turn. The war report shows you the number of casualties and who is controlling which fortresses, citadels and rune rings. The strategic map comes in two forms: terrain and nations. The terrain map is colour coded to show the terrain types and the nation map shows the national boundaries. On both maps, the position of all mobilized units is shown.

To win the game you must control all of the Galanor fortresses, citadels and all eight rune rings for a period of twelve turns. The Shadowlord wins if the citadel of Yarthros of Rovanium is captured by the Shadow Legions.

Colour is used well to show the different terrain and army types. The graphics are simplistic and there is no animation, but this is typical for strategy games. Sound is simply beeps and buzzes. The game comes well packaged with a map, key summary and a detailed instruction booklet.

Strategy games have never been particularly popular, which is unfortunate because they usually take longer to master than arcade games. This is one of the better strategy games and is worth considering even at the high price. The only complaint that I have is that if Shadowlord forces are on the water then you can not attack them because you are unable to cross water.

A delightful mixture of the sort of fantasy tale usually reserved for adventures and a good old fashioned wargame. It's a bit tricky working out a winning strategy but thoroughly absorbing while you're doing it. My only worry is that there aren't enough scenarios or variation in the Shadowlord's behaviour to present a large long term challenge. Nevertheless it's great while it lasts.

The strategic maps are difficult to interpret in green, hut the rest of the game is easy to identify.

Graphics 70%
P. Good use of colour.
P. Easy to recognise everything.

Sonics 6%
N. Hardly worth the effort.

Grab Factor 84%
P. Well packaged with map and atmospheric booklet.
N. The fact that it's a wargame may put people off.

Overall 81%
P. An intriguing game that will keep you occupied for many long hours.

An intriguing game that will keep you occupied for many long hours.