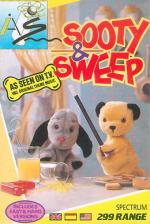 The roving eye of the software industry has finally reached this classic old show - running on ITV now for well over 1,000 years - and the small yellow one and the grey squeaky one are now a computer game. What would Matthew say?

Well, not a lot probably (too busy counting the huge pile of fivers they've bunged him), but we old Sooty fans can only be disappointed. It shapes up nicely - the graphics and instructions lead you to expect a fairly detailed and well-thought-out arcade adventure - but there's really not very much to it at all.

On each screen you have to jump around a series of platforms (disguised as furniture in Matthew's house), collecting Sweep's bones and avoiding, or neutralising if possible, the various nasties.

And, well, that's it. Rooms are fairly limited, and the challenge soon wears thin. There are Easy and Hard versions, a nice idea in theory, but the gameplay is so weak and repetitive that you couldn't really give a monkey's. Great licence, shame about the game.

There's not a lot to this licence. The rooms are fairly limited, the challenge soon wears thin and, although there are Easy and Hard versions, the gameplay is so weak and repetitive that you couldn't really give a monkey's.