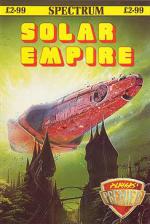 The inlay reckons this is called Solar Empire, but when you load it up it calls itself Synergy. How extremely strange.

Anyway, spooky name changes aside, this one is rather good - even if it's down to the sheer simplicity of the thing. The graphics are simple (but effective), as is the gameplay. You're a wiggly snake-like ship which has to fly around eight vertically-scrolling space levels (selected from the main menu), moving around the screen and blasting baddies as they fly towards you. Every so often you'll come across a large circle (which is, as it happens, a moonsized asteroid), which you have to try to crash into to get to collide with nearby planets in order to liberate another planet, which is quite handy really seeing as the galaxy has just been taken over by the evil Dargons. Understood? I'm sure you get the gist.

All sorts of add-ons are available too - tractor beam, long range scanner or collectable repair and upgrade pod, anyone? Yep, a definite gameplayer's delight.

(Oh, incidentally - what exactly is a Synergy when it's at home?)

All sorts of add-ons are available too - tractor beam, long range scanner or collectable repair and upgrade pod, anyone? Yep, a definite gameplayer's delight.