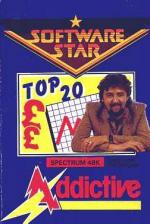 Software Star is the follow on from the hit game Football Manager. The object this time is to manage a software house and produce, for your board of directors, good profits and smash hits. You are informed that as Software Star's top programmer your personal ambition is to produce the most successful games program and be a software star for at least 10 months. Presumably this would then allow you to set up your own TT bike-racing team and live life up a bit. Your target for the game is to produce a pre-tax profit of £10,000.

The opening screen explains the task and gives the target set by the directors, the target always seems to be that same. To proceed you must input your name. The second page allows you to select a skill level, seven are provided, the first being 'beginner', the seventh 'genius'. The third page begins the company profile section and shows the state of the bank account, the current game on the market, listing its quality and how long it took to put it together.

The program starts with the first game being called 'Software S' which took 5 months to develop but its quality is 100%. At the bottom of this page you are told how the mags received the game. In this case it was 'excellent '. Press enter and you will be invited to launch a new game. All that's required is to type in the name of the new game. Now to the meat; we have to deal with the employees.

The productivity for the last six months is summed up and this can range from appalling to excellent - more often than not the current month's productivity is rated at poor. In order to improve the rating you can offer incentives or increase discipline. 'Sales force strategy ' deals with your sales in four regions. You are asked to enter the four regions in order of priority, the first will be given a major sales push the fourth will actually experience a large sales drop. Public relations is minefield for real life software houses, in the case of Software Star you are given two choices. You can take a chance and use 'hype' - we have all seen how well that can work. Alternatively you can be honest and hope the public will appreciate just what a nice bunch of chaps you are!

If a game is to sell then it must be advertised, especially if you want to hype your image, so booking advertising is a feature of the game that is fraught with traps. The most important page shows the charts. Your game will start creeping up the charts, but will it get to number one? The break even point (where your revenue is equal to the costs incurred) is shown on the screen together with the unit sales for each game. When the charts position has stabilised you will be presented with a sales revenue report which simply shows the revenue gained by the month's sales. The monthly statement page shows how you incurred your costs, subtracted from the month's revenue giving your profit/loss for the month. The last figure given shows how much you have in the bank - this is rarely a pretty sight! The final page in the sequence gives your star rating which ranges from a nobody to being a software star. The period of stardom is given in months together with details of the financial picture to date. After this page you are given an opportunity to save the game, otherwise you start the long hard slog all over again, the road to riches is not always paved with Porsches, Ferraris and smart logos. Unlike life Software Star gives you the chance to re-wind and start again.

Most screens are very attractive, but due to extensive error checking input tends to be slow.