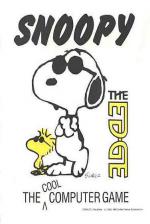 The teeth grindingly insecure Linus has lost his mucus riddled security blanket and unless you can re-unite the two, the soppy fool may have a breakdown.

So you've got to track down the blubbering fool's blanket and return it to him before he puts himself in a sanatorium through worry.

It's hard to imagine a less appealing storyline. But that's Peanuts for you.

The graphics are black and white (don't be fooled by the pics on the box) and well animated. The basic aim is to perform various tasks, collecting objects as you go and eventually come up with a procedure of manoevres which will eventually result in your possession of the blanket.

These involve a great deal of 'get object to obtain object y". In fact, that seems to be all you do. You collect a jar of sweets, eat the sweets capture a frog in a jar which produces a stepping stone for the river. You've then got to use a football to get across the river with the stepping stones. On the other side of the river is another object you need but you can't get it unless you are carrying something else.

It's an unfortunate fact that Snoopy can only carry one object at a time. A great deal of to-ing and fro-ing is necessary. Once you've appreciated the rather fine animation of Snoopy's feet, the speed (or rather lack of it) that he walks across the screen begins to irritate. Whenever there are background features in the frame (buildings, trees etc) he slows down even more. This is pretty poor show.

For all its instant appeal, Snoopy is really an extremely simple and rather dull game. I seriously doubt that anyone but the most ardent Snoop-o-phile could find more than a few hours entertainment in it.

Very cute and all that, but not a long player.

Very dull indeed. I seriously doubt that anyone but the most ardent Snoop-o-phile could find more than a few hours entertainment in this.