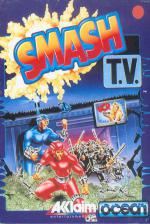 I dunno, call me easily pleased if you like, but give me a huge mutant skinhead on a tank and a chance to participate in the most violent game show ever invented, and I'll be having more fun than a polar bear on rollerskates at a fish market.

The shoot 'em up activity of Smash TV leaves much room for boredom however. - from the word go it's non-stop excitement, immediate fun of the purest sense, and only the terminally brain dead will fail to find it totally engulfing. About as addictive as breathing - and then some!

The idea, as with all the best games, is very very simple. Smash TV is the ultimate game show challenge, a close cousin to "The Running Man" that has the player shooting various bad guys for a whole host of glittering prizes.

Making his way through a series of interconnected rooms, the contestant tips the odds in his favour by picking up a range of brightly coloured icons, that bestow extra fire power, lives, shields etc, and secures a holiday in the sun by gobbling up handy bundles of cash. The hoards of baseball wielding thugs do their best to upset things of course, and aided and abetted by the likes of Mr Shrapnel (guess what his party trick is, kids!), several small legions of mutant lizard droids (or something) and our old friend the tank-bound skinhead, cause more bloodshed and mayhem than an inept machete juggler.

There's levels and stuff, of course, and if the four apocalyptic game zones don't manage to chop your nerves up into little pieces and then feed them to the shacks, then the appearance of the game show host will surely seal your fate. I mean, have you seen Bob Monkhouse recently?

In all, a highly enjoyable blast 'em up that will have you thrilled for hours. Smooth, detailed graphics, loads of fast sprites zipping around the screen with superb speed that is not impaired when played by two players makes Smash TV a complete, triggers bustin' masterpiece that should quench just about anyone's bloodlust. Now where did I put that chainsaw?

Thuggery performed at an almost professional level! This is the game that the Running Man should have been - brightly detailed, fast yet unjerky graphics and a blisteringly simple yet addictive gameplay.

Thuggery performed at an almost professional level! This is the game that The Running Man should have been - brightly detailed, fast yet unjerky graphics and a blisteringly simple yet addictive gameplay.