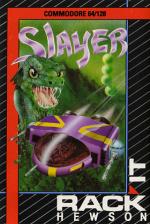 Somewhere, in the far-off reaches of space, trouble is arming themselves and blasting anything that approaches their station. It's up to you to put a stop to them. After all, you are the Slayer, the vigilante of the spaceways.

To stop the aliens from carrying on in their nasty habits, you must fight your way to the centre of their system, destroying everything that gets in your way. If you find that continued blasting at an object fails to kill it, then may we advise you to avoid it instead.

If you get fed up of your on-board laser, then why not pick up one of the aliens' systems and use those instead? Such items include extra-fast lasers, up and down guns and circling drones. Also along the way are items that may cause the aliens to shout "No! Don't touch that! That's... *arrrgh*!" just before they are blown to bits when you pick up the smart bomb. At the end of each section stands a guard droid, which takes a severe blasting before it relents and allows you to pass on to the next stage.

And if you think that's all there is to it, you're in for a nasty surprise - 'coz these aliens are tough!

First we had Salamander, then Katakis (Shhh! Not allowed to mention that!) and now we've got Slayer - the best budget right-to-left scroller this year!

Although it doesn't match the high standards of those full-price giants, it's a great pocket money game - one that you'll pick up next year and play again.

It reminds me most of that other Hewson shoot-'em-up, Zynaps, in design and play - but where Zynaps was a bit too hard and frustrating, the balance of difficulty and progress here is just right. Well worth the dosh, I'd say.

I always thought that shoot-'em-up games of this type were the sole property of the full price market - I never thought I'd see a game like Slayer at this price.

The graphics are suitably metallic-looking and suit the blasting action quite well - I particularly liked the snakey thing and the pick-up icons.

The sound is pretty much up to the standard of a ten quid game and the presentation is - well, it's *all right*.

What really makes this follow in the footsteps of games like Armalyte (though it never quite reaches the same frenetic standards) is the gameplay: lots of blasting and dodging put together brilliantly. Don't miss it, because it's one of the budget shoot-'em-ups of the year.

This is actually quite similar to Thalamus' Armalyte, and as such it's extremely playable. The collision detection is quite generous on the landscape, so that when things get tight, you don't always have to worry about being pixel-perfect.

The gameplay is where Slayer comes into its own, though: being armed with a full array of rotating add-ons and multi-directional missiles is a great feeling! (Right on, brother)

The only fault I found with it was the excessive toughness of killing the first end-of-level alien - but the rest of the game more than makes up for this. Miss Slayer at your peril!

Presentation 60%
Two-player option, neat screen layout and that's about it - who needs anything else with gameplay this good?

Graphics 80%
Very well designed alien landscapes and some brilliant snakes - even if they *aren't* original.

Sound 75%
A decent intro tune and some impressive in-game effects - unusual for a budget game.

Hookability 90%
Instantly addictive, once you've begun to pick up all those weapons.

Lastability 78%
The first level is a tough one to crack, but once you do, there's no stopping you having more goes.

Overall 90%
A brilliant budget version of the best of recent full-price shoot-'em-ups.

A brilliant budget version of the best of recent full-price shoot-'em-ups.