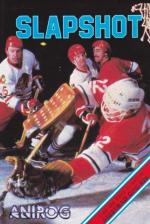 The rough and tumble of ice hockey is the name of the game and sometimes it seems less gentlemanly than those boxing simulations. The game is played on a left-right scrolling screen with two teams of four players.

You can play against the computer or a human opponent or even watch the sides battle it out in demo mode. The aim is quite simply to score goals by getting the puck into the opposition's goal-net. These are situated at either end of the rink and are protected by a goalminder. In between are the various rink markings including lines across the playing surface and face-off circles.

Games consist of three periods, each lasting four minutes, in which there's plenty of time for scoring. You control which ever of your side's players is the nearest the puck and have to get possession. If it's loose, then it's easy to pick up; just run into it with the stick. If the opposition have control, then it's altogether harder.

The puck can be stolen by running into the player, passing disconcertingly through him as you go. and hoping you pick up the ball. Alternatively come through swinging the stick and hope to either knock the ball away or bring the man crashing to the ground. This is a penalty but from the face-off that follows you may be able to win the ball.

When in possession a player travels slower than usual and an opponent may skate up and take the ball off him. This means either passing between players or bouncing the ball off the rink boards. Once you get within sight of the goal you can line up the shot and let fly. The goal minder moves fairly randomly but if he manages to intercept a shot, it will bounce off, perhaps into your path so you can have another try.

The scrolling is good with nice skaters, except when they pass through each other. The crowd is an ugly bunch but obligingly cheer goals. Things are really tough against the computer, being very difficult to dispossess and taking the ball off you all too frequently. Two player games are much more exciting with all the thrills and challenge that go with it.

I laughed like a drain when I first saw this - two teams of charladies with vacuum cleaners in a carpet cleaning competition. But once I was convinced it was meant to be ice-hockey, I warmed to it. Especially satisfying is the vicious physical contact. The graphics are not terrific - but it's good, nasty fun.

N. Not much variety in gameplay.
N. Off-putting when players pass through each other.
N. Often difficult to tell when you can or can't get possession.

The graphics are not terrific - but it's good, nasty fun. Especially satisfying is the vicious physical contact.