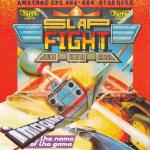 No sooner does one game appear in which you pick up objects to enhance the power of your ship than a whole shower of them do. It's basically a logical extension from adventure games, where you can pick up objects that expand your abilities, which was then adopted in arcade adventures and now shoot-'em-ups. I've found it's got boring rather fast... but at least it provides variety in what might otherwise be ordinary games.

This is of the vertically-scrolling breed of shoot-em-ups and is another of those oh-so-popular coin-op conversions. The concept is simple enough: just fly about the screen as it scrolls beneath you and wipe out any aliens foolish enough to wander into your sights.

The background is colourful and varied, scrolling smoothly but slowly downwards. This slowness would be more annoying if you weren't usually busy concentrating on staying alive, rather than hurrying forward.

As you blast the aliens you'll notice some of them leave gold stars lying around when they're destroyed. Pick one of them up and it cycles one step through a menu of additional powers. Choose to have one of these and it will return to the start of the menu.

The eight facilities are: extra speed, return to normal shooting, shoot sideways, increase size and firing rate of ship, bombs in front of the ship, laser beam, homing missiles and shield. Of these the most useful are the homing missiles, which last indefinitely and home in on their targets. Once you've got these you can use them in conjunction with the shield and extra speed to create alien megadeath.

Slap Fight is a playable game with slick graphics and plenty of variety. The weapon-choosing is unoriginal. And, in the long run, I think the game's just a little easy. Still a good game that won't disappoint action fans.

A tired subject: pick up objects to increase firepower; blast away. It may not win points for originality, but it is very playable and addictive.

Staying Power 76%
P. Lots of tough aliens and variety.
N. Scrolling is a little too slow to keep the pace of action going.

Pick up objects to increase firepower; blast away... It may not win points for originality, but it is very playable and addictive.