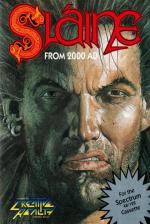 OK, I admit it. Slaine is my favourite character from 2000AD. He's a regular kind of guy. None of the obscure historical/biblical analogies found in Nemesis the Warlock. None of the fanatical stern-ness of Judge Dredd. Slaine the King is a down-to-Earth fella. You know where you are with him - usually.

The only flaw in his character is his tendency to lapse into a Warp. Spasm at the slightest sign of a fracas. So violent are these spasms, which allow warriors like Slaine to summon up incredible war-like powers, that Slaine must continually wear a harness to prevent him tearing his clothes and injuring himself during a fit.

As you can tell he's a bit of a handful, and Martech has really done a fairly splendid job in converting him to the Spectrum.

The whole project has been approached from an entirely different angle from that of Nemesis, the previous Martech 2000AD convert. Instead of going for the predictable side-on view and producing what would inevitably be written off as a Barbarian clone, Creative Reality - which was hired to take on the job - invented a system called Reflex.

The Reflex system operates by presenting you (as Slaine) with a list of thoughts, of which any one can be selected. The thoughts take up the left-hand side of the screen, which is enclosed by a suitably gothic border. Resting in this part of the screen are two dismembered hands. The large one is yours, and by moving the joystick over the desired word and hitting Fire, you can select it. The smaller hand represents the presence of Ukko, your utterly despicable side-kick goblin. Ukko follows you around and is a frightful pain. As a consequence, you think of striking him a great deal. Even carrying out such a heartless act won't make him vanish for long, though.

Anyway, because barbarians have an attention span of about three seconds, not having exceptionally large brains, thoughts drift across the selection area at a quite alarming rate, and picking them out can be quite tricky.

The right-hand half of the screen is left to accommodate a description of your current location and the comic-book style graphics which depict the action.

One of the most important aspects of Slaine is the combat sequence. For one reason or another, you are absolutely bound to get yourself in a scuffle of some sort. Here the program takes on a decidedly D&D feel, with both sides inflicting and incurring damage points. During the fight sequence, solely war-like thoughts will come into your head, and you have to choreograph your moves without seeing their result.

At the end of the combat, assuming you are the victor, you'll be informed of your injuries and given a fill list of initial options - Move, Action, Look, etc.

Much of the game is spent wandering from location to location, encountering characters and attempting to use your objects to best effect. If you waste one villager, don't expect the others to be particularly helpful.

The biggest niggle I had with Slaine was that you never really feel that you are in a real environment. The despcriptions seem a little cramped, and the atmosphere provided by the little black and white pictures that pop up now and again to depict the scenes is limited by their infrequency.

Don't let the adventurey-ness of Slaine put you off. It's genuinely engaging game, with completely original controls and high-quality cartoon-style (though static) graphics.

Innovative and interesting pseudo-adventure incorporating some speedy action too. A sturdy comic conversion.