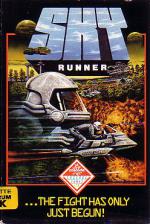 The plot's rather involved but the action is straightforward shoot-'em-up fare. The inlay blurb rambles on about future civilisations and drug harvesting on distant planets but, when you get into the game, it turns out to be a pure seek and destroy game.

Your mission is to command a two-phase operation against the drug growers (the drug is called Sky hence the title). As their plantations are heavily guarded by defence towers, you must first knock them out. Piloting your skimmer craft above the planet surface, you have to blast the tops off the towers before they can unleash return fire. The threat level (the number of missiles lobbed in your direction) and speed can be altered quite drastically so that making this an exciting game rests mainly in your own hands. If you play at a slow speed with minimum 'threat' you are likely to doze off but at the other extreme it's virtually unplayable. So it might take you some time to find the right level where it's still a challenge.

When the first phase is complete, you are ready to transfer to two wheels. A motorbike is dropped from your skimmer and sets off through "the forest", which means there are a few trees to avoid occasionally. Your aim here is to take out other bikers who are protecting the narcotic crops. A note of subtlety is introduced here as the bikers who all loo the same may also be members of your own squad. A display panel tells you when the biker has been identified and whether he requires blasting.

Landing a shot on the bikers proves difficult as they drive up from behind you and disappear over the horizon in the blink of an eye.

Demolishing a few enemy bikes was as far as I got. To destroy the huge drug harvesting machine, you must first destroy all the bikes.

Sky Runner is an undemanding burst of blasting that doesn't measure up to Cascade's previous release, the flight simulator, Ace, but should please those who still like their fingers firmly on the fire button.

An undemanding burst of blasting that should please those who still like their fingers firmly on the fire button.