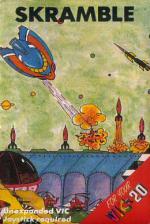 Some of you may have noticed a similarity between the name of this game and that of a popular arcade game. This is no mistake!

Across an alien landscape files our hero, dropping bombs and shooting things. There is no division of control between the gun and the bomb; fire one and you drop the other.

The enemy consist of what appear to be free-standing lavatory buildings with associated winding gear. Later little rockets are launched at our space ship, which seems to be oil-fired, as it is large tanks of this that we must hit in order to keep fuel up.

The are some pretty spiders to shoot next, and then the game gets difficult...

I liked this game but it is rather flawed by the scoring system. Cumulative score is kept on the screen all through the game - and then it disappears!

I liked this game but it is rather flawed by the scoring system.
Logout